ARTISTdirect.com editor Rick Florino recently conducted an interview with METALLICA bassist Robert Trujillo. A couple of excerpts from the chat follow below.

ARTISTdirect.com: Coming from an old-school thrash background, do you feel like you brought a raw edge to "Death Magnetic"?

Trujillo: I think it was a combination of things. If you want to call it a new beginning, you can. It felt natural, with the new team and the new attitude. [Producer] Rick Rubin was really instrumental in getting Lars [Ulrich, drums] and James [Hetfield, vocals/rhythm guitar] to reunite with that old-school thrash vibe. For so many years, it seemed like they were trying to get away from it in a sense. They were doing other things, of course, and being creative, but they weren't really dwelling in the thrash zone. For me, as a bass player, it's really good to be creatively a part of this. To play thrash on my first official record release with METALLICA is more exciting for me. I really love METALLICA's old-school years with Cliff Burton [late METALLICA bassist], and it's just a lot of fun.

ARTISTdirect.com: There's also a modern vibe to the songs as well. A lot of that has to do with the new unity and your bass playing. These songs don't have a dated feel. "Death Magnetic" is probably the freshest thrash record to come out in the 21st century.

Trujillo: Yeah, I agree. There's definitely a combination of vibes on this. It doesn't sound like any specific METALLICA record. It has its own identity, as any METALLICA record does. The key thing about this is it's an album that we wanted to be able to perform live. That's one of the things that Rick conveyed. He was like, "Create a body of music that you can challenge your audience with. Let's take it back to the old days where you were trying to get a deal and you were putting music together for your demo tape." Getting into that mindset was crucial. There are arrangements that, at times, seem technical and a bit abstract, but they still groove. To really pull this music off, it has to groove. In that sense, "Death Magnetic" has a really nice live performance persona to it.

ARTISTdirect.com: Is the fact that you're a father always on your mind now?

Trujillo: Yeah, this is an interesting point — now that each one of us has multiple kids. Kirk [Hammett, guitar] has two children as well. For me, it was like, join METALLICA and six years later I'm married and I've got two kids [Laughs]. Life changes in this band. That's one of the main things we have in common. We're all very different people — extremely different. Lars and James are completely different. They probably wouldn't have anything to do with each other if they didn't have music. We all connect through music. That's what makes us brothers. When we're on stage, and when we're writing, we have a mutual respect for each other. Outside of music, we're very different. Our families bring us together. It's something that we share and we have in common. If I've got questions about potty training my four-year-old son or two-year-old daughter, I can go to the other guys in the band because they've all been through it. That's cool, and that's special. It also makes things easy when we're planning our tours and trying to schedule things a year or two in advance with the school schedules and recording schedules. That is something that we all share. You always think about your kids on tour or on stage. The other night was James' daughter's birthday. He brought her up on stage and sang happy birthday to her in front of 20,000 people. I felt like crying [Laughs]. I thought, "Boy, this is heavy!" I also thought, "Someday, maybe that'll happen for me." It's something that the kids love to experience and be a part of as well. It's a lot of fun.

ARTISTdirect.com: What is it about METALLICA that will never die?

Trujillo: There are a few things that I've noticed. The fans, obviously, are amazing. We take a lot of pride in trying to connect with our fans. Every night we have a meet-and-greet. You can only meet so many of your fans, but we try to do the best we can. We meet between 15 and 20 fans. We do that. We always try to stay in touch through the fan site and our fan club. The other side to that is METALLICA — with the detail to the music and the love for the music — one of the things I notice is when we put on our instruments, it's like being a kid in the garage again, going back to the early days. People start jamming DEF LEPPARD riffs, AC/DC or IRON MAIDEN. Jokes are flying around. It's a really fun time. The band loves to make music and has fun doing it. That's what makes METALLICA relevant still.

Photo below courtesy of Metallica.com 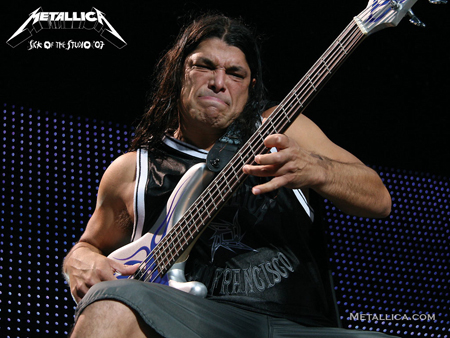