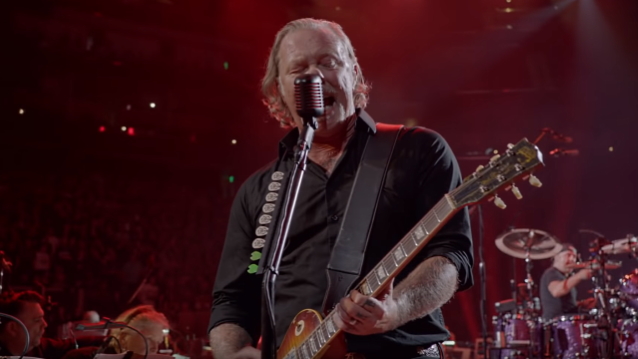 METALLICA has earned the highest debut on Billboard's Mainstream Rock Songs chart in the last five years with the "S&M²" version of "All Within My Hands". The track, which was recorded during METALLICA and San Francisco Symphony's September 6 and September 8, 2019 concerts at San Francisco's Chase Center, bowed at No. 12 on the survey. It is the highest debut on the Mainstream Rock Songs chart since SHINEDOWN's "Cut The Cord" opened at No. 9 back in 2015.

The concerts were historic on multiple levels: They served as the grand opening of San Francisco's Chase Center, reunited the band and Symphony for the first time since the 1999 performances captured on the Grammy-winning "S&M" album, and featured the first-ever symphonic renditions of songs written and released since those original "S&M" shows.

On August 28, "S&M²" comes to life once more with the release of "Metallica And San Francisco Symphony: S&M²". "S&M²" will be available in a staggering array of formats, ranging from a digital album on all leading streaming outlets, to 4LP vinyl, 2CD, DVD and Blu-ray versions, to a limited edition color vinyl 4LP + 2CD + Blu-ray Deluxe Box featuring sheet music, guitar picks, poster and more, all the way up to a Metallica.com exclusive Super Deluxe Box, limited to 500 copies, each featuring actual sheet music used by the Symphony during the shows and hand-signed by all four band members (in addition to including everything in the Deluxe Box). With this long-awaited Blackened Recordings release, "S&M²" can be fully experienced by others beyond those who squeezed into the Chase Center over those two unforgettable evenings.

"S&M²" is available for pre-order now, preceded by the "S&M²" versions of "All Within My Hands" and "Nothing Else Matters", both now available across digital platforms.