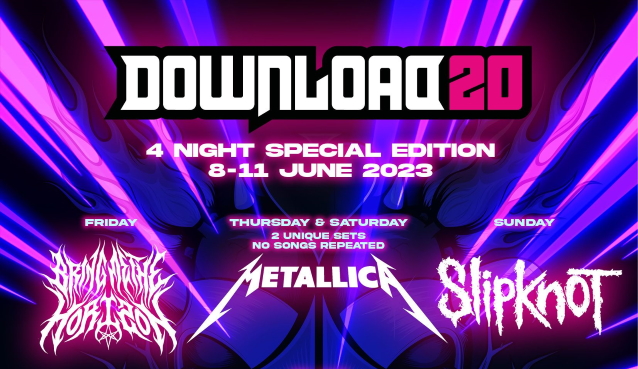 METALLICA, SLIPKNOT And BRING ME THE HORIZON To Headline 2023 Edition Of U.K.'s DOWNLOAD Festival

United Kingdom's Download festival is back to celebrate its epic 20 year legacy with four headline sets for the first time ever. Announced today are headliners SLIPKNOT, BRING ME THE HORIZON and METALLICA, who will deliver two massive no-repeat performances. This year the festival will take place over four days on June 8-11, 2023 at the spiritual home of rock in Donington Park, Leicestershire. General tickets are on sale at 10 a.m. on Thursday, November 10 at www.downloadfestival.co.uk.

Also joining the 20th-anniversary party are U.K. and international heavyweights EVANESCENCE, PARKWAY DRIVE, DISTURBED, PENDULUM, ARCHITECTS, GHOST, THE DISTILLERS, PLACEBO, ALEXISONFIRE, ASKING ALEXANDRIA, MOTIONLESS IN WHITE, I PREVAIL, THE BLACKOUT (reunion),FEVER 333, STRAY FROM THE PATH, LORNA SHORE, NOVA TWINS, MUNICIPAL WASTE and many more. The headliners and other acts announced today highlight the multi-generational appeal of the festival, which has seen over two million rock fans make the pilgrimage to Donington over the last 20 years.

METALLICA will be returning to Donington after over a decade away, and the multi-million-album-selling phenomenon will be making up for their absence by headlining two nights of the festival, Thursday and Saturday. The two performances will contain absolutely no repeat songs, ensuring that fans are treated to the complete METALLICA experience. The perfect celebration of Download's 20th anniversary with arguably the world's greatest rock band.

The mighty METALLICA say: "We are next-level honored to once again come back and partake in the Download shenanigans on the hallowed grounds of Castle Donington, which has an unparalleled place in rock history. On top of that, to be able to share our double show format with two completely unique sets with no repeat songs for the first time ever in the U.K. is way fuckin' cool. Bring it on!!”

Steel City's finest BRING ME THE HORIZON will be headlining Download festival for the very first time after years of working their way up the line up since first playing in 2006. After achieving a U.K. number one with their Grammy-nominated album "Amo" and headlining Reading and Leeds festivals in 2022, BRING ME THE HORIZON are a huge British rock success story. Their mammoth stage show will take Download festival by storm in a career-defining moment.

BRING ME THE HORIZON frontman Oli Sykes says: "Download festival was one of the first festivals I ever attended as a punter. It was our first amazing festival experience to play as a band, and now the fact that we are headlining such a prestigious event blows my mind. We can't wait to bring a whole new sound and show for the Download audience."

The festival's grand finale will come at the hands of SLIPKNOT, who will be headlining Sunday night. The Iowa nine-piece need no introduction, having achieved two U.K. No. 1 albums and blown people's minds at every single one of their four Download headline sets so far. Having recently released their experimental seventh album "The End, So Far", SLIPKNOT are well and truly back and ready to unleash both new and old hits at the mightiest of all Download festivals.

SLIPKNOT turntablist Sid Wilson says: "Download festival! So many great memories, one of the most amazing crowds to play in front of, always an honor to share the bill with so many amazing bands, and of course, I'll never miss the opportunity to play my homeland."

Download's legacy does not only include the sensational artists who have performed there over the years, but also its unrivalled community, warm atmosphere and amazing afterhours entertainment at The Village, which got even better with the addition of The Crucible in 2022. Once described as "the last sincere festival experience" by VICE, it continually proves just why people keep coming back for more.

Download's Andy Copping says: "This year marks a huge milestone for Download, celebrating the incredible 20 years of the festival is no small feat. We really wanted to up the ante for this special anniversary, adding an extra day for the fans to experience the unforgettable lineup, that once again brings together unparalleled talent from the rock music world back to Donington Park!"

This is only the beginning for Download festival 2023, with many more acts and surprises yet to be announced to celebrate its 20-year legacy at the hallowed grounds of Donington Park.

New for 2023! The Download Megastore will be located in The Village, where fans can immerse themselves in all things Download, including a coffee bar, in-store activities and live experiences. There will be unique items and brand collaborations that are exclusive and only available onsite, from jewelry and clothing to accessories and homeware. The Megastore will open 10 a.m. to midnight from Wednesday, June 7 and throughout the festival. 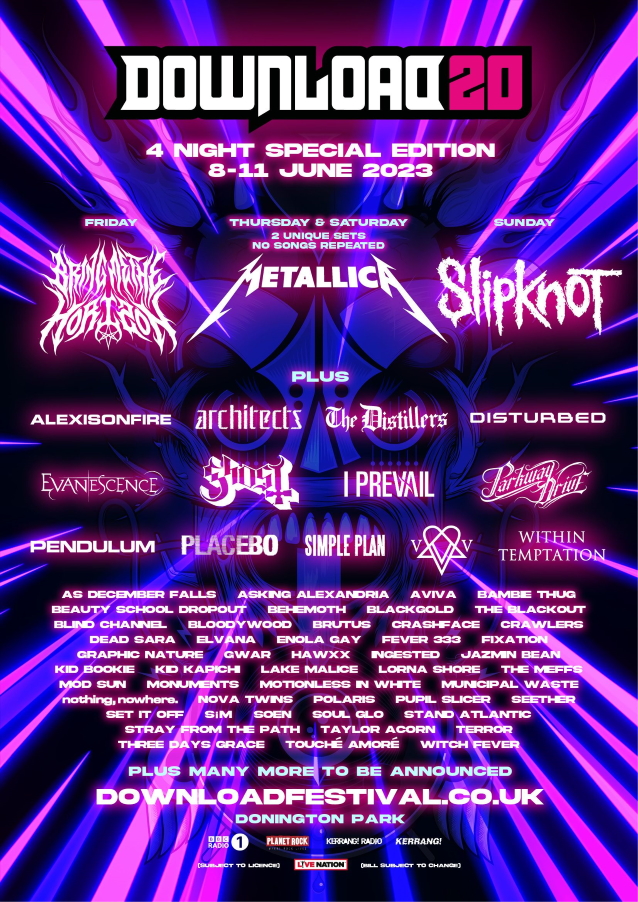