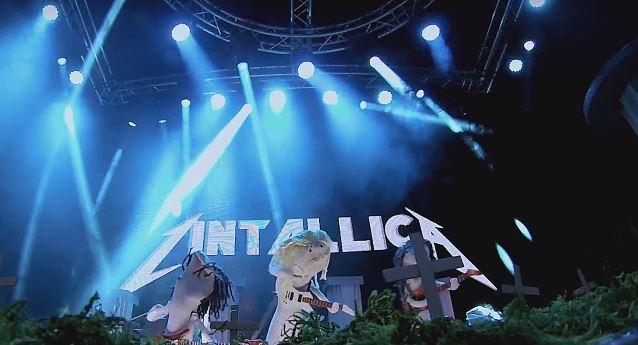 Sock Puppet Parody, which pays tribute to iconic bands and glorifies their undergarments, has posted a video for sock-puppet act LINTALLICA's song "Master Of Sock Puppets" which hilariously parodies METALLICA's "Master Of Puppets". Check it out below.

The stage in the LINTALLICA video bares a striking resemblance to that of the 1989 "…Justice For All" tour, but includes a tribute to METALLICA's late bassist Cliff Burton.

LINTALLICA's "Master Of Sock Puppets" video was shot at Gas Monkey Live, a Dallas venue that has hosted bands like MÖTLEY CRÜE, MISFITS and GWAR.

Says Sock Puppet Parody: "The song describes a lost sock that gets a shot at redemption when the master of puppets brings him to life."

As previously reported, METALLICA is collaborating with an author named Matt Taylor on a book about the making of the band's classic 1986 album "Master Of Puppets".

The book is expected to arrive in the fall of 2015, several months ahead of the 30th anniversary of the album's release, which will take place in February 2016.