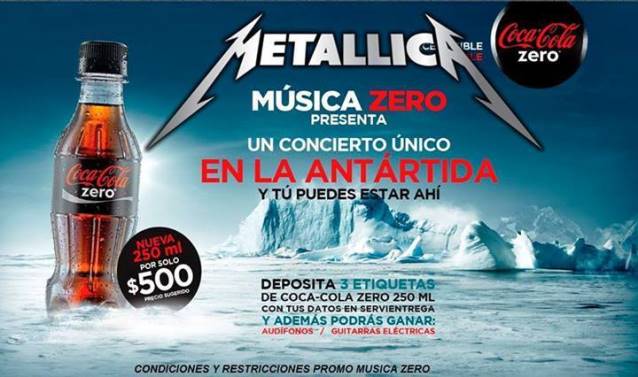 METALLICA To Perform In Antarctica?

According to the Colombian web site of Coca-Cola Zero (the low-calorie variation of Coca-Cola),METALLICA will play a very special concert in Antarctica. The Coca-Cola-sponsored event will take place between December 2 and December 15 and will see the group performing on Earth's southernmost continent, about 98% of which is covered by ice that averages at least 1 mile (1.6 km) in thickness.

METALLICA drummer Lars Ulrich told a San Francisco radio station in an interview last month that the band has something coming up in December that will surprise fans. Asked what the group had in store for the immediate future, Ulrich explained, "There's a very interesting thing coming our way in December . . . There's another frontier heading in METALLICA's direction in December. Which, if anybody (at the band's management) even knew that I just said what I just said, they would hunt me down and silence me. But there is another frontier coming in December, which we're very excited about."

The first rock concert ever performed in Antarctica took place on July 7, 2007 at British Antarctic Survey's (BAS) Rothera Research Station, one in a series of Live Earth concerts that were held on the same day in all seven continents. The science team's indie-rock house band NUNATAK performed as the lone act. NUNATAK's concert, though performed in front of only 17 people, was broadcast all over the world.

Coca-Cola became the first corporation to participate in an expedition to Antarctica. Each year an international group of Coca-Cola employees and bottlers join the expedition and embark on a journey of inspirational leadership and teamwork.

Over the years the Coca-Cola employees have supported the design and building of the worl's first education station in Antarctica, The E-Base.