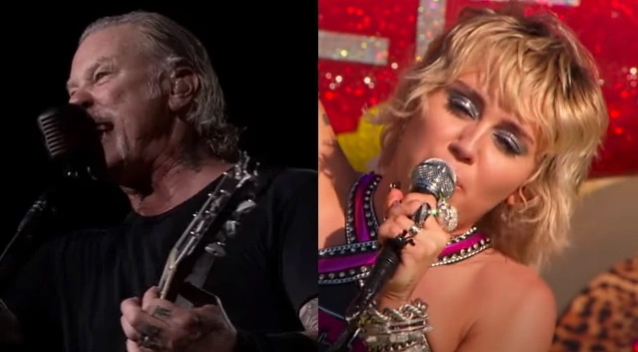 METALLICA To Perform With MILEY CYRUS On 'The Howard Stern Show'

METALLICA will perform with pop star Miley Cyrus on SiriusXM's "The Howard Stern Show" next week. The exact date for the performance has not yet been announced.

METALLICA and Miley will likely team up to play the band's classic song "Nothing Else Matters" in celebration of release of the remastered deluxe box set of METALLICA's self-titled fifth album — also known as "The Black Album" — due on September 10 via the band's own Blackened Recordings. Also included will be a companion set titled "The Metallica Blacklist", which will be packed with covers by major recording artists. Cyrus is among the 53 musicians included in the covers set, which will include her version of "Nothing Else Matters", also featuring Elton John, cellist Yo-Yo Ma, RED HOT CHILI PEPPERS drummer Chad Smith, frequent collaborator Andrew Watt and METALLICA bassist Robert Trujillo.

Next Week On Howard

Catch us on The Howard Stern Show next week on #Howard100 on SiriusXM and the SXM App when we'll perform LIVE with Miley Cyrus!

Posted by Metallica on Friday, September 3, 2021