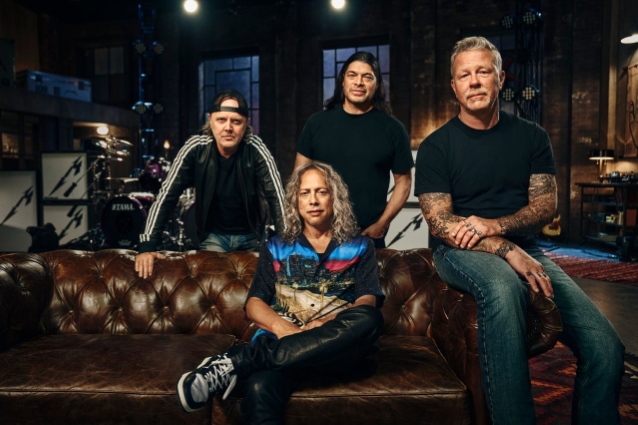 METALLICA Welcomes New Executive Director To 'All Within My Hands' Foundation

METALLICA has announced the appointment of Peter Delgrosso as executive director to its All Within My Hands (AWMH) foundation. Pete has served on AWMH advisory board since 2018 and is focused on the future of the foundation.

Says Delgrosso: "All Within My Hands is an incredible organization reflecting the charitable vision of one of the greatest bands in the world, and I am incredibly honored and humbled to be named executive director and to the board. I've seen firsthand the huge impact the foundation has made across its Metallica Scholars program to promote workforce education, the fight against hunger, and numerous other local critical services, including disaster relief due to wildfires, COVID, and hurricanes. Ed Frank and the entire team have done an incredible job, and I am looking forward to following in their footsteps."

Since the mid-1990s, Pete has been operating and investing in a wide range of public and private technology-related businesses. Throughout his career, he fostered a vast network of relationships across technology, sports, entertainment, consumer businesses, venture capital, and private equity. Pete is a founding and managing partner of Bryant Stibel, a firm Pete and his partners founded with Kobe Bryant in 2013 that has done over 200 venture and private-equity investments.

In addition to his current position on the AWMH board, Pete is an advisory board member for the Los Angeles Sports and Entertainment Commission, a group that brings the largest sports and entertainment events to Los Angeles. He also sits on the board of LSTN Sound Company, a socially conscious music company that has helped over 50,000 individuals receive the gift of hearing for the first time. Originally from Connecticut, Pete now lives in the Los Angeles area with his family.

Executive director emeritus Dr. Ed Frank, whose five-year leadership saw the formation of the Metallica Scholars initiative among other AWMH milestones, will remain a voting member of the board. METALLICA is also welcoming Paul Donahue, longtime AWMH advisory board member, to the board of directors. Paul Donahue is managing partner of Black Squirrel Partners, a content and growth equity platform backed by METALLICA. Prior to Black Squirrel, Paul enjoyed a 32-year career at Morgan Stanley, where he remains a senior advisor.

Says METALLICA: "We are encouraged by the leadership and commitment to the mission each person brings to AWMH and look forward to what's to come."

Formed in February 2017, All Within My Hands is a 501(c)3 non-profit foundation focused on creating sustainable communities by tackling the issues of hunger and workforce education and encouraging volunteerism.

AWMH was established as a way for the entire METALLICA family to give back to communities around the world that have supported the band on tour. In its first six months of operation, the foundation donated more than $750,000 to local food banks around the world — a practice the band and AWMH have continued on the North American "WorldWired" tour, donating to local food banks in every city and meeting dedicated people who focus their daily lives on helping others.

The METALLICA family and the All Within My Hands foundation board members are committed to running an organization of the highest integrity where expenses are kept to a minimum and are paid for entirely by the band, the board, and friends who have worked with the band over many years and are excited to help in this mission. As such, 100% of all donations from fans and third parties go to the organizations AWMH supports.

For more about All Within My Hands, visit www.allwithinmyhands.org.