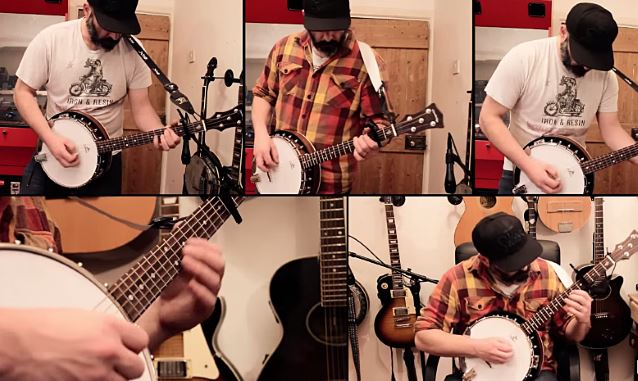 A banjo cover version of METALLICA's smash song "Enter Sandman" courtesy of Banjo Guy Ollie can be seen below.

Says Ollie about the clip: "Coinciding with the end of my first year on youtube, this one took a while but here's a full version of 'Enter Sandman', the first one in my series of tributes to all the bands I loved from the '80s and '90s.

"I was scratching my head thinking of the most random way to start the video, and as I was cutting down firewood for drying it, [I] thought… perfect !! :) True story!"

"Enter Sandman" was featured as the opening track and lead single from METALLICA's eponymous 1991 album. The song was produced by Bob Rock, and the music was written by Kirk Hammett, Lars Ulrich, and James Hetfield. Vocalist and guitarist Hetfield wrote the lyrics, which deal with the simplest concept of a child's nightmares.

The "Enter Sandman" single was certified gold in the United States for sales in excess of 500,000 copies. Acclaimed by critics, the song is featured on all of METALLICA's live albums and DVDs released after 1991 and has been played live at award ceremonies and benefit concerts. It is considered to be METALLICA's signature song to the general public.

METALLICA's self-titled "black album" has sold more than 16 million copies in the U.S., according to the Recording Industry Association of America (RIAA).