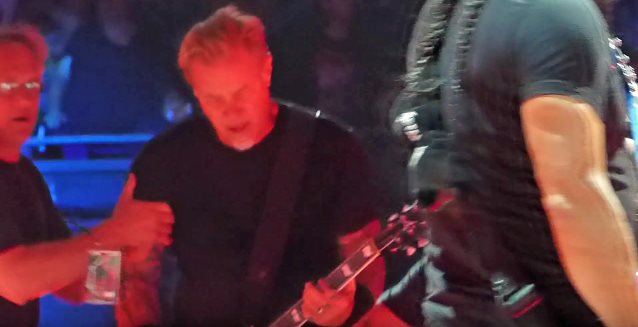 METALLICA was performing the sixth song of its set, "Now That We're Dead", at Ziggo Dome in Amsterdam when Hetfield apparently took a wrong step and fell into a small hole on the stage that had just opened up (and from where one of four rectangular percussion tables was supposed to come up). Within seconds, a couple of crew members came over to help the frontman get back on his feet as bassist Robert Trujillo and guitarist Kirk Hammett looked on with obvious concern. After Hetfield was lifted back on stage, he continued playing the track while grimacing in pain.

"Is everybody okay?" Hefield asked the crowd after falling over. "Yes, I'm okay. My ego, not so much. But we're fine. Hurt my feelings a little bit."

Fan-filmed video footage of the incident — shot from several different angles — can be seen below.

This is not the first stage accident that Hetfield has been involved in as a member of METALLICA. During a 1992 stadium tour with GUNS N' ROSES, James suffered second-degree burns to his face, arms and hands after an ill-placed explosion erupted during the song "Fade To Black". Hetfield later said: "There was extra pyro in addition to the original pyro and I got a little too close." He credited his guitar with saving him from further injury.