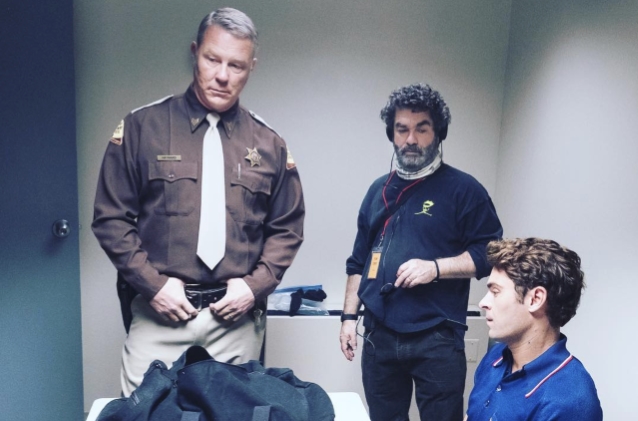 Actor Zac Efron has praised METALLICA frontman James Hetfield's performance in the thriller "Extremely Wicked, Shockingly Evil And Vile", which premieres on Netflix and in select theaters this Friday (May 3). The film follows the relationship between notorious serial killer Ted Bundy, played by Efron, and his longtime girlfriend, played by Lily Collins, who at the time had no knowledge of the crimes.

Hetfield plays officer Bob Hayward, a no-nonsense Utah highway patrol veteran who was the first law enforcement officer to arrest Bundy in 1975 after pulling the killer over and discovering burglary tools in his car but wisely suspecting much worse. While Hetfield has played himself in other films and television productions, this is his first dramatic role taking on a different character.

During an appearance on last night's episode of "Jimmy Kimmel Live!", Efron was asked by the late-night host about working with the METALLICA frontman, and the actor applauded at hearing Kimmel utter Hetfield's name. "He comes on the set, and it's one of the more pivotal moments," Efron said. "It's the moment that Ted actually got caught for the first time — he ran a stop sign. And James Hetfield plays the policeman that picks him up."

Efron continued: "And James Hetfield, to his credit, and absolutely nailed the part, he just crushed it. It's like he’s been acting his own life. He had no fear. He did a great job. I was ready to maybe give James Hetfield [an acting] tip, but he didn't ask for a single one. James Hetfield is the shit!"

After Kimmel quipped, "Of all the stories about Ted Bundy, I never knew he was arrested by METALLICA. I had no idea," Efron continued: "Even though I was acting … when I got pulled over by James Hetfield, it was kinda like a dream come true. [For] a lot of dudes, it would be their dream come true."

Academy Award nominee Joe Berlinger ("Paradise Lost") directed "Extremely Wicked, Shockingly Evil And Vile". Hetfield and Berlinger crossed paths before when the latter directed and produced the seminal rock-doc "Metallica: Some Kind Of Monster" along with the late Bruce Sinofsky. Berlinger also penned a book about his experiences with the band, "Metallica: This Monster Lives".