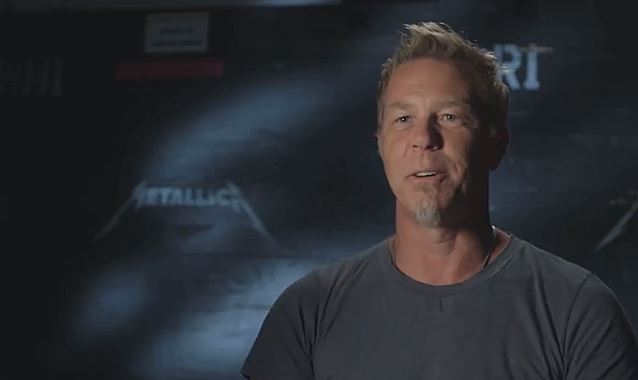 METALLICA recently celebrated the 25th anniversary of the release of "…And Justice For All", the band's fourth studio album and first to reach both the Top 10 on the Billboard album chart and the one million mark in sales. According to The Pulse Of Radio, frontman James Hetfield spoke with ARTISTdirect about the record, saying, "Touring that thing, I think of it as our fancy, showing-off album, 'We're crazy progressive musicians. We really know how to play here!' [laughs] Making that work into this is a challenge, and I love that part of it."

The disc was also the first full-length studio effort to feature bassist Jason Newsted, with Hetfield recalling, "It wasn't the first time with Jason Newsted, but it was the first real studio record he showed up and kind of was heard on the album. [laughs] That's another whole therapy session right there!"

In an April 2013 interview with Metal Exiles, Newsted stated about his missing bass parts on the "…And Justice For All" record: "There are so many years of water under the bridge with that and I can now see it for what it is.

"There is no real confusion or mystery to me now that I can look back after time and look on the situation.

"When I went in to record 'Justice', I had only recorded one time and that was with FLOTSAM for 'Doomsday'. I was used to recording with the band, you go in together, do it and you're done. With 'Justice', I went into the studio with an assistant engineer and nobody else, no other band members, just go in, plug in and do your best. I plugged into the same shit I did the FLOTSAM record, recorded my parts and loaded my gear and went home. There was nobody there to work parts out with or discuss how this or that was going to sound; it was just 'record your bass' and that's that.

"If I had of known then what I know now, it would have been different, but it became a classic album for what it was; we captured a moment in time and that is all there is about it.

"I used to be pissed about it back then, but that was a long time ago, but the records I have made since then have had some ugly bass parts all over the place on them."

Newsted joined the band in late 1986 after the death of Cliff Burton and made his recording debut with them on 1987's "The $5.98 EP: Garage Days Re-Revisited".

"Justice" eventually sold more than eight million copies. The single "One" was the basis of the group's first official music video.

Just like the band's 2003 album, "St. Anger", and to a lesser extent 2008's "Death Magnetic", "Justice" was criticized upon its release for its production. Drummer Lars Ulrich told The Pulse Of Radio that fans back then were equally vocal. "I mean it was unbelievable, you know, '...And Justice For All'," he said. "People were saying, 'That's the worst-sounding record, where's the bass, and it sounds like it was recorded in a garage, and...' But, you know, listen, you do the best you can in the moment and then you move on."

Several tracks from "Justice", including the title song, "Blackened", "Harvester Of Sorrow" and, of course, "One" still find their way into METALLICA's set lists to this day.

A new version of the famous Lady Justice statue from the cover, which first appeared in the band's live show on the original "Justice" tour, recently surfaced as part of the stage production in the movie "Metallica Through The Never".