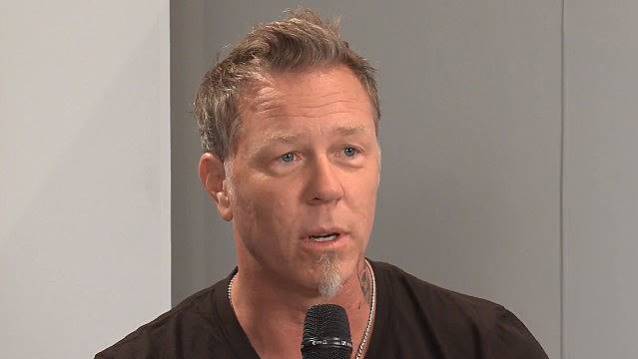 On January 27, Don Jantzen of the KTBZ-FM (also known as 94.5 The Buzz) alternative rock radio station in Houston, Texas conducted an interview with METALLICA guitarist/vocalist James Hetfield. You can now listen to the chat using the SoundCloud widget below.

Asked when METALLICA fans in the United States can expect to see the band on the road here again, Hetfield said: "You know what? We keep going back to Europe for summer festivals. People keep offering us headline spots over there. [We're going to] South America this year."

He continued: "I don't know what's happening the States.

"The States has gotta step up and want their music.

"I'm not sure what's going on in the States as far as rock and metal goes and concert-wise, but there's not really any willingness to get a big show out there and make it worthwhile to actually get out there and play. You see other bands gathering up six different bands just to go out and play.

"It's pretty tough in North America."

He added: "Right now, it seems like metal is struggling a little bit in the States. Obviously, the Orion [Music + More] festival that we had tried to do the last couple of years has really not been… Gosh, it's been a disaster financially, and it's not able to happen again because of that. So it's a bummer. So, you know, we're doing what we can to keep being alive here. And I hope to get out and play in the States. It seems like forever since we've been out and about. You know, we've hit the coasts and we've done TV stuff and things like that. But it will happen again. So hopefully, to get your fix, you're able to get the ['Metallica Through The Never'] DVD and sit there and headbang with your friends."

Drummer Lars Ulrich said last year in a radio interview, "Detroit was a great experience. We'd love to bring this thing back to Detroit. We've gotta sit down and look at the practical parts of it… It's not an easy thing to launch a festival, but we've had a lot of fun the last two years doing it, and we hope to bring it back to Detroit."

METALLICA surprised fans at Orion Music + More on June 8, 2013 by playing its 1983 debut disc "Kill 'Em All" from beginning to end on a smaller stage at the event. METALLICA was officially announced to play a headlining set on June 9 to close out the festival, but hit the stage at 4:30 p.m. one day earlier for a 10-song set that started with "Hit The Lights" and finished out with "Metal Militia".

At the first Orion festival in 2012, METALLICA played both 1991's self-titled "black album" and 1984's "Ride The Lightning" in their entirety on separate nights.