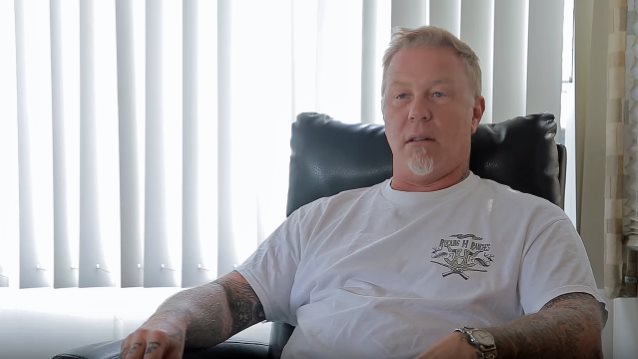 To celebrate the 34th anniversary of METALLICA's classic sophomore album, "Ride The Lightning", frontman James Hetfield took part in a rapid-fire round of questions and answers for a video that was later posted on the band's official Instagram. Check it out below.

METALLICA reissued "Ride The Lightning" in April 2016. The album had been remastered for the most advanced sound quality and was made available in three formats — CD, vinyl, and deluxe box set. The deluxe box set included original source material from the band's personal collection with many never-before-heard-or-seen recordings, along with a book including rare photos and essays from those who were there.

Asked if METALLICA was trying to do something different, musically, after 1983's "Kill 'Em All", Ulrich replied: "It was the first time that the four of us wrote together and we got a chance to broaden our horizons. I don't think it was a conscious effort to break away from anything musically. Obviously, listening to songs like 'Fight Fire' and 'Trapped Under Ice', we were obviously still into the thrash type of stuff. But we were realizing you had to be careful that it didn't become too limiting or one-dimensional."

He continued: "All four of us were so into so many different things. And 'Kill 'Em All' was primarily written with James and I and [Dave] Mustaine [former METALLICA and current MEGADETH mainman]; so Kirk [Hammett, METALLICA guitarist] and Cliff [Burton, late METALLICA bassist] didn't really contribute to any of the songs on 'Kill 'Em All'. 'Ride The Lightning' was the first time that both Cliff and Kirk got a chance to add what they were doing. They just came from a different school, especially Cliff, who came from a much more melodic approach."

Kirk spoke about the fact that riffs from songs by his previous band, EXODUS, "Die By His Hand" and "Impaler", found their way into "Creeping Death" and "Trapped Under Ice", respectively. "What I think happened was when Lars and James were thinking about getting rid of Dave [Mustaine], our sound guy, Mark Whitaker — who was EXODUS' manager — gave them EXODUS' demos," Kirk said. "I think 'Die By His Hand' might have caught their ears. So when they were writing 'Creeping Death', they went, 'Great. 'Die By His Hand'. Put it right there.' It was definitely not me going, 'I have a riff here in this EXODUS song, and it needs to be here in this METALLICA song.' By the way, I wrote that 'Die By His Hand' riff when I was, like, 16 years old."

Ride The Lightning Q&A with @papa_het_