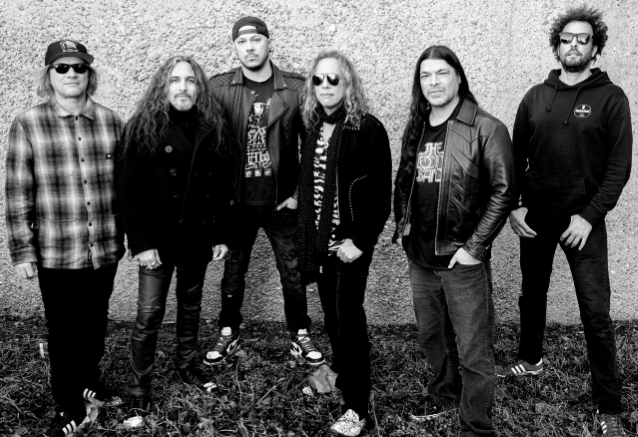 METALLICA's KIRK HAMMETT And ROBERT TRUJILLO To Perform With THE WEDDING BAND In Napa, California

THE WEDDING BAND, the side project of METALLICA guitarist Kirk Hammett and bassist Robert Trujillo, along with Whitfield Crane (UGLY KID JOE),Mark Osegueda (DEATH ANGEL),Jon Theodore (THE MARS VOLTA, QUEENS OF THE STONE AGE) and Doc Coyle (BAD WOLVES, GOD FORBID),will perform on May 27 at Jam Cellars Ballroom at Margrit Mondavi Theatre in Napa, California. The show will be part of the "BottleRock Afterdark" performances that will take place in conjunction with this year's METALLICA co-headlined edition of the BottleRock Napa Valley music festival, which is scheduled for May 27-29 at the Napa Valley Expo in Northern California.

Back in 2019, Kirk told Cosmo Music about THE WEDDING BAND: "It's just really fun jamming with these guys. It's something different. For Rob and I, it's cool, because we get to indulge our love of funk and punk... I was listening to all sorts of crazy music in the '70s — a lot of funk, R&B — so I've always had a real appreciation of the music of that time. When I found out that Rob did, we started playing our favorite songs. Funk from the '70s is so unique, and it's almost a lost art because no one is writing songs like that anymore... We got together and started jamming out tunes, and it sounded amazingly good, and then we started to improvise, and it sounded amazingly good... It's primarily a way for Rob and I just to jam out. We love to jam; we love playing with people; we love to play funk. It's become a little bit of an outlet for us, but it's nothing really serious or anything like that. We're really open to anyone coming and playing with us. I even asked the other guys in [METALLICA] if they want to come by and jam. [We're] always open — this is not a closed-border sort of band situation. Anyone can come in and play, as long as they're good... It's so recreational, but musicians need recreational music as well. They need to play stuff that they don't really have to worry too much about, and that we don't have too much accountability over. It's just a light, cool, fun thing for us, and Rob and I need that, because a lot of times, we put so much into our performance. There's so much intensity, so much riding on having to execute this song and play the shit out of it. You've just got to put a lot of love and care into our band's music, and that's fine, and I love it – I'm super-passionate about it — but it's also fun to just go to Disneyland for a while and play some tunes that are just fun for you to play, inspired you, make you smile, make you sweat and make you go, 'Man, I needed that.' I think everyone needs something like that... It's just so fun. We're something that's not to be taken too seriously, because none of us want to take it that seriously."

In 2020, Hammett confirmed that he and his METALLICA bandmates have begun working on the follow-up to 2016's "Hardwired… To Self-Destruct" album while in quarantine. A year earlier, Hammett said that he had already accumulated "a lot" of "kick-ass, great" ideas for METALLICA's next LP.