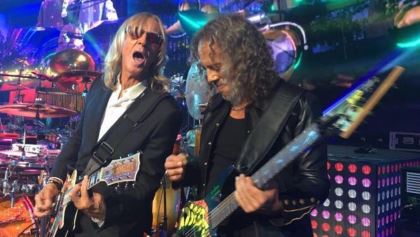 METALLICA's Kirk Hammett joined Elton John on stage this past Saturday night, April 30 at The Colosseum at Caesars Palace in Las Vegas, Nevada to perform "Saturday Night's Alright For Fighting".

He added: "Davey Johnstone is a great guitarist and it was an honor to play with him. I had first seen him play during Alice Cooper's Madhouse Rock Tour [in] 1979 and he kicked major ass!!!"

Hammett told Canadian journalist Mitch Lafon that Elton John was one of several rock artists who had a huge influence on him when he first discovered music. He said: "When I was a young kid… I had decided to make a point of going out to the record store and buying albums from artists that I heard on the radio. It was Elton John, it was David Bowie, it was KISS, it was THIN LIZZY and it was LED ZEPPELIN."

METALLICA has been working on and off on its tenth studio album for a couple of years now, but the last few months have seen the band get down to serious business on the disc and spend less time than usual on touring or other projects.

The new METALLICA effort is being produced by Greg Fidelman, who engineered and mixed 2008's "Death Magnetic".

The band's recently announced headlining show at Minneapolis' new U.S. Bank Stadium on August 20 sold out all 66,000 tickets in less than 10 minutes in late March. Joining METALLICA at that show will be AVENGED SEVENFOLD and VOLBEAT.

METALLICA's classic 1986 album "Master Of Puppets" is among the records that have been selected for induction into the Library of Congress' National Recording Registry. Every year 25 recordings that are "culturally, historically, or aesthetically significant" and at least ten years old are selected.

It was an honor and extreme privilege to share the stage with such a legend. Thanks, @EltonJohn!