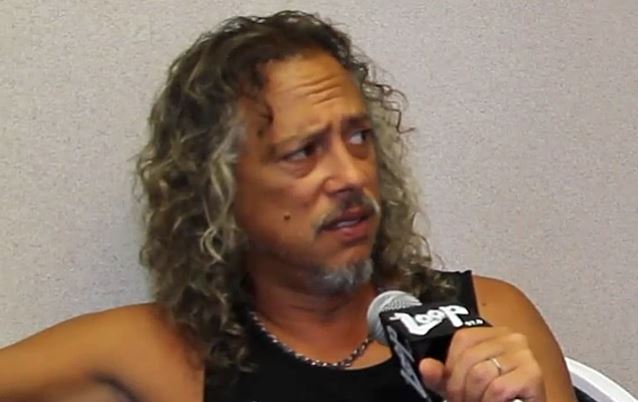 It's been nearly seven years since METALLICA last released an album, and while the band is now writing material for its next studio effort, guitarist Kirk Hammett recently admitted to something that may have slowed down the process a bit. Hammett said on "The Jasta Show" podcast, "I put riffs on my iPhone, but something very unfortunate happened to me about six months ago. I lost my iPhone [containing] 250 musical ideas. And I was crushed. It didn't get backed up. And when it happened, I was bummed out for about two or three days."

Hammett added: "I lost [the phone]. I just plain lost it. I can't find it. I'm still looking for it to this day. I just set it somewhere and… It still might turn up. I'm hoping it will. To try to remember those riffs? I can only remember, like, eight of 'em. So I just chalked it down to maybe it just wasn't meant to be and I'll just move forward with it."

In a brand new interview with Tim Virgin of Chicago's WLUP-FM 97.9 (Loop 97.9) radio station conducted prior to METALLICA's August 1 performance at the Lollapalooza festival, Hammett spoke in more detail about his lost iPhone. He said: "The funny thing is I said that in passing to my friend Jamey Jasta as just normal 'bro' conversation. And when I said I lost my phone, I had lost it about nine months previous to that. And so when that information traveled around the world, I was getting e-mails and texts from friends all over the place, saying, 'When I was with you, when we were hanging out in Istanbul, you seemed to have it.' And I'm thinking, 'No, no, no…''

He continued: "The sequence of events were… I had lost the phone way before I told Jamey about that. And I'll tell you what happened: yes, I did go to my computer and hit the button 'Find my iPhone,' and it tracked it to the Copenhagen [Denmark] airport, and then the dot disappeared. So what happened was I lost it in a cab. Someone found it in a cab, kept it, and took it to Copenhagen airport and got on a plane, and that was the end of it. But that wasn't the phone with all my riffs on it. [Laughs]"

To his credit, Hammett seemed to take the loss in stride, telling WLUP-FM 97.9: "I ask myself, maybe the universe is trying to tell me something. Maybe those bits of music were just not meant to be heard by anyone else. I don't know. Maybe my karma is just bad and I'm paying for bad behavior in the past. I don't know."

Asked what the new songs sound like, Hammett told Jasta: "Let's just say that the stuff that's coming up is super riffy, super heavy… it's a lot similar to [2008's] 'Death Magnetic' but different in certain parts."

METALLICA has not revealed when it plans to release the new album.