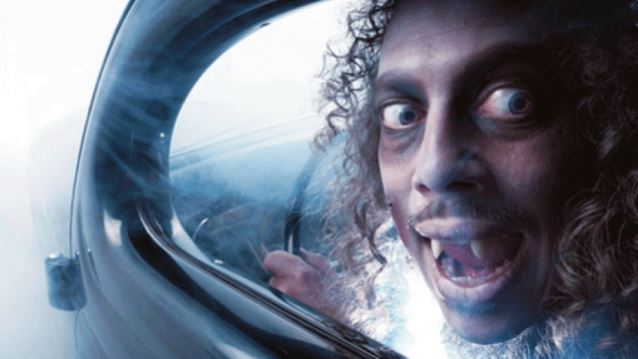 METALLICA's KIRK HAMMETT To Host His Own Horror Convention

Among the special guests set to appear at the convention are makeup FX artists Greg Nicotera ("The Walking Dead", "Kill Bill 1 & 2", "Spiderman") and Tom Savini ("Dawn Of The Dead", "Day Of The Dead", "Creepshow").

In 2012, Hammett released "Too Much Horror Business - The Kirk Hammett Collection", an oversized 228-page hardback book documenting his love of all things related to the horror genre and features more than 300 photos of items from the collection of horror memorabilia he has accumulated over the years. The book also included three lengthy interviews with Hammett, who also wrote the captions for many of the photos.

Hammett told the San Francisco Chronicle, "I've been into [horror] stuff since I was five years old . . . My love for this stuff is insane and totally obsessive-compulsive. It's just one of those things. I'm still waiting to outgrow it or get tired of it or get bored with it. But it does not seem to happen."

Hammett added, "I've always been attracted to the darker things in life. I was never one to go for light, airy stuff, even as a child. My whole aesthetic has always been one of the darker side. That rings true also in my tastes in music."

Hammett has hosted Kirk's Crypt, a haunted house stocked with posters, film props, vintage comics and custom guitars, at the first two installments of the Orion Music + More festival, a music and lifestyle festival created by METALLICA and their friends at C3 Presents.