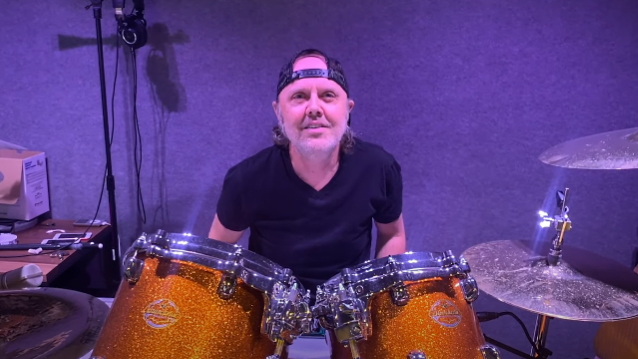 Born in Gentofte, Denmark, on December 26, 1963, Lars is the son of the Danish musician, filmmaker and former tennis pro Torben Ulrich, who turned 93 in October.

Ulrich played tennis professionally as a teenager and could have gone on to a career as a tennis star, but chose music instead.

Ian shared an Instagram photo of him with Ulrich taken nearly 38 years ago, and he included the following message: "Two 20-year-old kids on the Tennent's and Special Brew probably talking about how much we loved VAN HALEN's 1984. This pic was taken in March of 1984 at a flat in London that METALLICA were staying in. They'd left the studio in Denmark (they were recording Ride The Lightning) to come to the UK for the Hell On Earth tour with THE RODS and EXCITER but the tour was canceled due to a lack of ticket sales! METALLICA couldn't go right back to Denmark as the studio had been booked for the time they'd be in the UK. The label, Music For Nations got them a flat and set up some press as well as their first show in the UK at the Marquee. I was in London to do some promo for the just released Fistful Of Metal. I was only supposed to be in town a few days, but when my hospitable friends METALLICA got the flat they 'twisted my arm' to crash with them for a week or two - we got up to some awesome shit. And yes, it was during this shenanigan filled time that Cliff [Burton] and I got arrested, but I digress. The point of this post is to say HAPPY BIRTHDAY LARS!!! I hope you're having a great holiday my friend and I also hope you still have that DIAMOND HEAD sweatshirt! Cheers! @larsulrich @metallica #tennentssuper #carlsbergspecialbrew".

Wongraven shared what appears to be a relatively recent photo of him with Ulrich at an empty restaurant or a large dining room. He wrote in an accompanying message: "There's always something to be said for the individual who is confident enough to be aware of his or her accomplishments while at the same time being down to earth. Gene Simmons once described Lemmy's greatness by saying he was an unassuming type of person. Throughout the twenty years I have known Lars as the pivotal figure he is in the world of heavy music, he has only proved his nay sayers wrong. Because he is one of those unassuming type of persons while being a lot of fun at the same time. He is genuinely interested in YOU, he is warm and generous and he's got an immaculate taste when it comes to art and music. The pandemic has been rough on a lot of us, but my sms exchanges with this fella, has been very helpful in keeping my head up high. Thank you for being you, brother and HAPPY BIRTHDAY".

METALLICA was formed when Ulrich, who had moved to Los Angeles, placed an ad in a local paper called the Recycler looking for other musicians to play with. The ad was answered by guitarists James Hetfield and Hugh Tanner of the band LEATHER CHARM.

"I went to see YESTERDAY AND TODAY [later known simply as Y&T], playing a show on, like, a Wednesday evening, at the Starwood in L.A. in December 1980," Lars told Kerrang! magazine a few years ago. "I remember the band were having a great time. There was this vibe and energy thing between them and the audience. It was pretty chill, and I remember thinking, 'This looks like so much fun.' At the same time, I was starting to realize that if I wanted to really get anywhere playing tennis, I would have to spend eight hours a day on the court and there was this grind in front of me that didn't have quite the same allure anymore. It wasn't like the next morning the roof opened and a lightning bolt came down, but over the next couple of months, the tennis thing fizzled out and music started taking over."