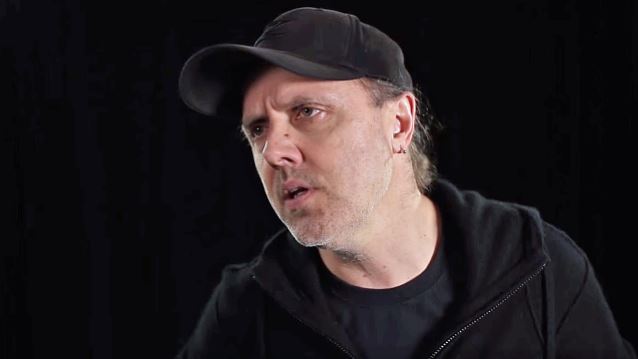 METALLICA's LARS ULRICH: 'I Think It's Important For Everybody That Record Stores Survive'

METALLICA drummer Lars Ulrich recently spoke to BBC Radio 6 Music about the band's love of records and record stores. You can now listen to the chat using the widget below. A few excerpts follow (transcribed by BLABBERMOUTH.NET).

On how he first got introduced to record stores:

Lars: "I was born into a family in Denmark. My dad, basically, lived and breathed music and had an intense record collection and actually was a part-time music critic for Danish newspapers and so on. So I remember, when I was a little kid, going to record stores with him, and particularly to the main one in the heart of Copenhagen. When I was about ten, eleven years old, I started going to record stores myself and buying records, buying a lot of singles and 45s from the U.K. and started kind of buying albums and that whole thing — '73, '74, when I was about, like I said, around eleven or twelve years old. It was like the most exciting thing in the world to make the trip into central Copenhagen, go to the record store, look at records, listen to records in the store, engage in conversation with the people that worked in record stores. The record store was your portal, like your gateway to everything music."

On why record stores mean so much to METALLICA:

Lars: "Record stores have always had a very significant place in my life, and METALLICA has always championed, obviously, independence, and championed autonomy and championed being edgy and kind of… I guess, to a degree, without getting too poetic about it, challenging the status quo and being the small fish in the big pond or whatever. So helping the independent record stores and all that out there, and shouting their worth from every rooftop is something that we're quite happy to do."

On whether he thinks it's important for all artists to see record stores survive:

Lars: "I think it's… Not just as an artist, but I think it's important for everybody that record stores survive. I have three boys, and one of my kids just started getting into vinyl over the last year or two and going to Amoeba [Music] and going to Rasputin [Music], and so on, in Northern California, which are two of our local [stores], it's a huge thing. And so, as an artist, it's important, and I think as a fan of a music, as just a connoisseur of that particular kind of culture, it's important — the human connection."

On the first album he bought:

Lars: "The first full-length album that I bought was DEEP PURPLE's 'Fireball'. I bought that in February of 1973, the day after my dad took me to see them play in Copenhagen. And at that time, most of the stuff I was buying was the stuff that was coming out of England at the time: SLADE, STATUS QUO… even things like ALVIN STARDUST or things like MUD, or stuff like that. That was sort of the first stuff that I got into."

On the ritual of buying an album and listening to it from beginning to end:

Lars: "I believe that people have shorter attention spans than they [used to]. But you have a tendency to hold on to how you were reared or how you grew up or the experiences that were part of your formative years. So, obviously, turning records over and sitting and listening to fifteen minutes' worth of music or twenty minutes' worth of music on a side is just sort of like how I was reared, so you will always treasure those types of experiences."

Following the tragic terrorist attacks in Paris in November 2015, METALLICA's release for this year's Record Store Day was "Liberté, Egalité, Fraternité, Metallica! - Live At Le Bataclan. Paris, France - June 11th, 2003", a CD featuring a live recording of METALLICA performing at the same venue that was the site of the deadliest of the November attacks.

Proceeds from sales of the CD benefit Fondation de France's Give For France charity.