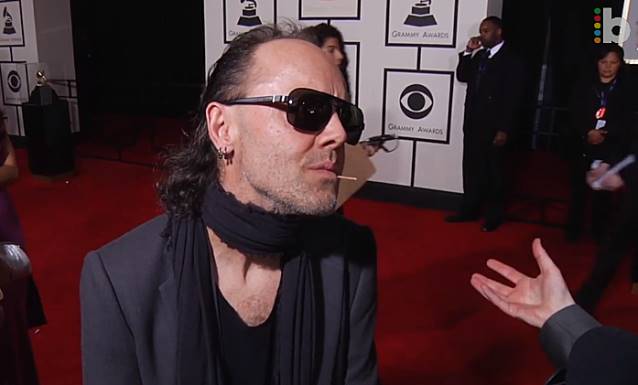 METALLICA drummer Lars Ulrich was interviewed by Billboard on the red carpet of the 56th annual Grammy Awards, which was held Sunday night (January 26) at the Staples Center in Los Angeles. You can watch the chat below.

METALLICA played its classic song "One" with Chinese concert pianist Lang Lang at the Grammy Awards.

Ulrich told Artisan News about the performance: "Obviously, [Lang Lang is] a very talented musician, he's a very dynamic musician, he projects himself very well. I mean, when he plays, he's really full of energy and he's got a lot of kind of showmanship and kind of energy that protrudes off the stage and right into people's hearts and souls. So I would like to think that it's a good collaboration."

Hammett told The Pulse Of Radio that the song's arrangement highlighted Lang Lang's playing without changing the song. "We're not lightening up the song just for him," he said. "We're still hanging onto all the heavy parts and it's gonna be amazing. He's just an amazing pianist, and at one point he's going to be, like, weaving in and out of my guitar solo and playing parts of my guitar solo with me. That's gonna be interesting. I've never, ever experienced that ever before with anyone we've ever played with."

"One" was the first single released from METALLICA's 1988 album "…And Justice For All", becoming the first song from the band to gain substantial commercial radio airplay. It was also the basis for the first music video the group ever did.