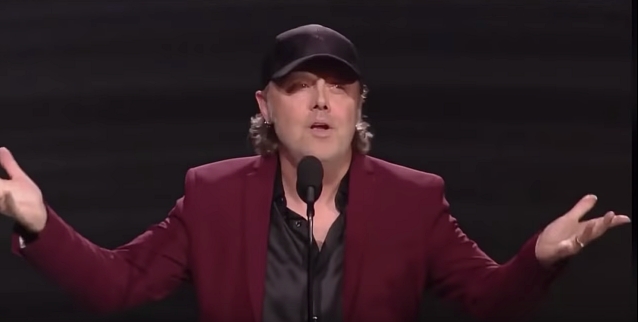 The drummer made a surprise appearance after the Colombian singer/songwriter performed several of his greatest hits.

"[I met] Juanes years ago, after performing in Mexico," Ulrich said in English. "And I have keenly watched his music, his creativity and his radiant humanity soar across this beautiful planet. Then I learned he was a METALLICA fan… Now tonight, we come full circle. I proclaim myself a Juanes fan! Mi amigo, mi parcero, I'm proud to recognize you as Person of the Year from the Latin Recording Academy!"

This past July, Juanes performed the "Kill 'Em All" classic "Seek & Destroy" at the Rock Al Parque festival in Bogota, Colombia. Video footage of his rendition — complete with pyrotechnic displays — was posted online and it eventually caught the attention of the METALLICA members themselves. The San Francisco Bay Area heavy metal legends later took to Twitter to share a clip of the performance and wrote in an accompanying message: "We're blown away by the reception our friend @juanes received in Bogota for his awesome rendition of Seek!"

Last year, Juanes told The Philadelphia Inquirer about his early musical inspirations: "I came up in Colombia with folk music, singing with my parents and sisters. There were the rhythms of tango and bolero and cumbia. Those were my strongest influences. But when I was 13, I went crazy with rock music and became the biggest fan of METALLICA, SLAYER and SEPULTURA. I still love METALLICA. Today, I listen to many new artists and learn while staying connected to my roots. For instance, I love reeggaton. I hear that stuff from my kids. They teach new music all the time."

In a 2011 interview with The Washington Post, Juanes said that he "got crazy with rock music" when he was 13 years old. "I was a big fan of METALLICA, SLAYER, SEPULTURA, MEGADETH, all those guys. It was part of my life for 10 years, and then I was part of a metal band for a moment and then the band broke up and I moved to Los Angeles and started my career. Even if it doesn't have anything to do with metal music, there is always a little bit of those years in my music, always a little piece of attitude that I try to combine with the folk side."

? We’re blown away by the reception our friend @juanes received in Bogota for his awesome rendition of Seek! #RockalParque2019 pic.twitter.com/NOZozTFMGJ