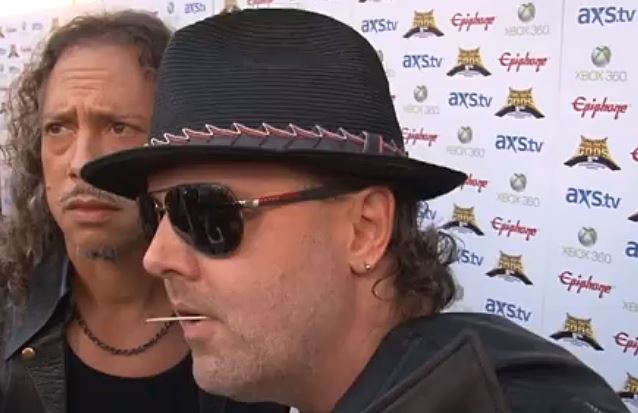 In METALLICA's new 3D IMAX concert movie, "Metallica Through The Never", fans have a chance to see the band performing on a massive stage, specially constructed for the film, that incorporates elements of METALLICA live shows from the past 30 years. Artisan News asked drummer Lars Ulrich at this past May's Revolver Golden Gods awards in Los Angeles if there is any chance of taking that stage show on the road. See his response in the video clip below.

Ulrich previously stated about the possibility of touring with the "Through The Never" stage: "Let's see how well the movie does and let's see if there's any kind of… I mean, we've never toured the stage. It was just made for the movie. So there's definitely a chance that we may tour. I don't think… It's not gonna happen, like, in the next couple of years, but maybe it'll be something that we come back to five or ten years down the line. Right now, we wanna go and work on another METALLICA record for the better part of the next year, or whatever, but we may tour it one day, absolutely."

According to Box Office Mojo, "Metallica Through The Never" has taken in just $3.4 million at the box office as of October 27. The film reportedly cost more than $20 million to make, with the band putting up most of the money for the project.

A recent video documenting the making of "Through The Never" showed Peter Mensch, one of METALLICA's managers at Q Prime, discussing with the band ways to save $2 million in order to get the film's budget down to $30 million, according to Bloomberg.com.

"It depends on what you count," Lars Ulrich said. "Are you counting the promotion, the marketing, the live record, the stage that we'll continue to use in future tours? This is way north of eight figures. It's a lot for us."

Marc Reiter, who works for Q Prime, told METALLICA's fan club magazine So What! that the movie was the biggest single expense in the band's history, more than the combined budgets of all their records to date. Q Prime also invested an undisclosed amount in the film.

Ulrich told The Quietus that he is not ready to write the film off as a flop. He explained, "That remains to be seen! Ask me when I come back and talk about the new record two years from now . . . I'm sure that if we don't make all the money back, then, I don't know, (we will in) T-shirt sales seven years down the line."

Justin Bieber's "Never Say Never" is the highest-grossing concert movie ever with $73 million in the U.S., according to Box Office Mojo.