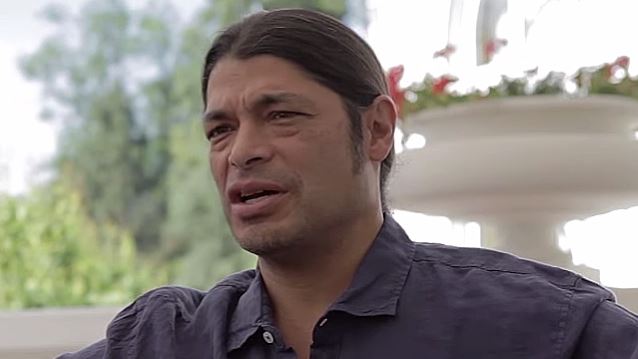 "'Tallica Parking Lot", an animated film created by METALLICA bassist Robert Trujillo and Titmouse Animation Studio, was part of the official selection at this past summer's Annecy International Animation Film Festival in France for the best TV film in competition.

An interview with Trujillo about the film can be seen below. A couple of excerpts follow (transcribed by BLABBERMOUTH.NET).

On how he would describe "'Tallica Parking Lot":

"''Tallica Parking Lot' is, basically, roughly about a four-minute animated short which is centered around the parking lot of METALLICA, and that can be anywhere in the world.

"Many years ago I realized and I noticed that there were all these incredible festive events going on in the parking lot. No matter where in the world you were, there was always interesting people, interesting things going on, and I felt this was a great opportunity to bring that to life and share it with the world. It's very musical, there's a lot of energy in it, there's a lot of little hidden treasures and secrets in it. So there's a lot of, kind of, fun stabs at the history of the band. It all revolves around what we call a band flyer. Flyers are… When you just start a band and you're having a show, you make a flyer. And usually they're handdrawn, and it has the names of each band, and it has the date that you're playing and where and all that stuff. So it revolves around this magical flyer, which is the magic carpet for ''Tallica Parking Lot'. And some of the stories are true that happen in this film, so it's a combination of things."

On how the idea for "'Tallica Parking Lot" came about:

"It's very interesting, actually. The story itself evolved from a dream I had — literally. I woke up about four in the morning, and I had the story, and I just started writing. And I didn't stop writing for about a week. I mean, I was writing on napkins, I was writing on anything possible. It almost became an addiction; it just kept coming in. But the idea originated many years ago around the concept and the idea of doing something that would revolve around the parking lot as a theme. The story had come in a dream. I mean, that's pretty much how it evolved. And that's what I find so special — when you actually imagine something, but really, when it comes to you in a dream, and then you can bring it to life on the screen, it's very powerful."

"I've always been a fan of animation. As a kid, I used to watch a lot of the Saturday-morning cartoons and I was always a fan of even claymation and that whole medium. I even studied animation at one point at UCLA for a semester. And then I had a band called the INFECTIOUS GROOVES, which was a spin-off of another band I had called SUICIDAL TENDENCIES. And the INFECTIOUS GROOVES' music revolved around images; there was always, sort of, these wild, fantasy-driven characters, and that's what I always saw when I had written songs — imagery.

"To have the opportunity to bring ''Tallica Parking Lot' to life through images was really special. And also to have a lot of my heroes and my friends in the film was really, really special. People like Lemmy from MOTÖRHEAD. You may not know who Lemmy is, but he's an iconic rock and roll master. And Bootsy Collins, and my bandmates Lars [Ulrich], James [Hetfield] and Kirk [Hammett] from METALLICA. It's very cool."

"'Tallica Parking Lot" was premiered at the Fantastic Fest in Austin, Texas on September 25, 2013. The soundtrack to the film has "big, energetic beats as the animations panned through 2D and 3D views of the fans that pre-game at METALLICA shows," according to HitFix. "I wrote most of [the music for] it, but [METALLICA frontman] James Hetfield had a heavy hand in helping me finish it," Trujillo told AMFM Magazine. "It's an original music score by METALLICA. It has some very cool cameos that range from 'South Park' to 'Beavis & Butthead' and Lemmy from MOTÖRHEAD."

He added: "Just like [METALLICA's new 3D movie] 'Through The Never', you're part of the creation of something, and to see it come to life on the screen, especially when it's animated, is really special."

"'Tallica Parking Lot" and three versions of "Metallica Through The Never" were made available on the DVD/Blu-ray and other formats of the release, which came out on January 28 through Blackened Recordings.

"'Tallica Parking Lot" takes its title from "Heavy Metal Parking Lot", the classic 1986 documentary short that captured fans tailgating before a JUDAS PRIEST and DOKKEN gig. After being passed around as a bootleg for years, it eventually earned a DVD release that added more than two hours of bonus material.