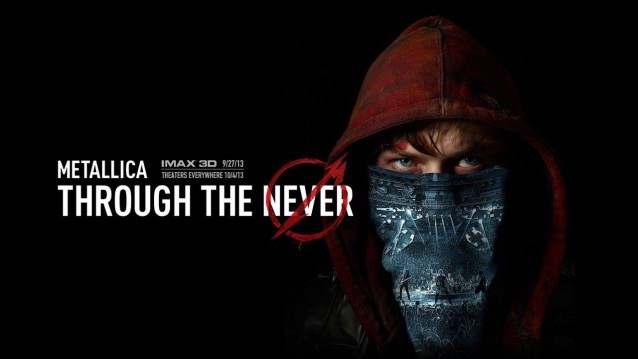 "Metallica Through The Never", filmmaker Nimród Antal's captivating 3D movie featuring one of music's most enduring and iconic bands, will premiere at the prestigious Toronto International Film Festival on Monday, September 9 at 7:30 p.m.

Says the band: "Now in its 38th year, Toronto International Film Festival is the most respected and prominent film festival in North America with many major films making their worldwide debuts there (last year's festival brought in nearly 300 feature films from over 70 different countries!). 'Through The Never' will screen in the special IMAX at TIFF section and we'll be on hand for the red-carpet premiere, to introduce the film and will spend some time in Toronto to chat with the press."

IMAX Corporation and Picturehouse have announced that "Metallica Through The Never" will be digitally remastered into the immersive IMAX 3D format and released wide in North America exclusively into IMAX theatres for a one-week engagement starting Friday, September 27. The film will expand into additional theatres on October 4.

Starring METALLICA, a cast of thousands of their fans and breakout star Dane DeHaan ("Chronicle", "The Amazing Spider-Man 2"),"Metallica Through The Never" is written and directed by award-winning filmmaker Nimród Antal ("Predators", "Kontroll") and produced by former IMAX film producer Charlotte Huggins ("Journey To The Center Of The Earth"). The film marries groundbreaking footage and editing techniques with a compelling narrative, in which a band crew member (played by DeHaan) is sent out on a mission during METALLICA's roaring live set in front of a sold-out arena. While on this mission, he unexpectedly has his life turned completely upside down.

The IMAX 3D release of "Metallica Through The Never" will be digitally remastered into the image and sound quality of The IMAX Experience with proprietary IMAX DMR (Digital Re-mastering) technology. The crystal-clear images, coupled with IMAX's customized theatre geometry and powerful digital audio, create a unique environment that will make audiences feel as if they are in the movie.

Speaking to Collider.com, DeHaan stated about "Metallica Through The Never": "It's, in a way, like a 3D concert movie but there's also this narrative that ties together all the footage. It's gonna be, first of all, really rock and roll and really 'METALLICA,' for lack of a better word; they don't hold back at all. But during the concert, I basically go on this trip as a roadie for the band and I pretty much literally have to go through hell and back to take it back to them, and all of this is going on during the concert, so it all ties together really kind of beautifully and uniquely. It's unlike anything that I've ever seen before; it's almost like a concert movie meets 'The Wall' meets METALLICA."

Ulrich cited the 1976 LED ZEPPELIN movie "The Song Remains The Same" as a major influence on "Metallica Through The Never", explaining to Classic Rock, "There are four members in LED ZEPPELIN, four members in METALLICA, it's a full-length movie, and there's a lot in this film that does not take place onstage. The major difference is that the stuff that takes place offstage in the METALLICA movie does not feature any members of METALLICA. It's two separate worlds — a METALLICA show and a story that unfolds in a parallel universe — and at some point they intertwine."

The ZEPPELIN film interspersed concert footage with fantasy sequences starring each member of the group.

The concert sequences for METALLICA's movie were shot in August 2012 at two shows in Vancouver, Canada.

"Metallica Through The Never" theatrical trailer: