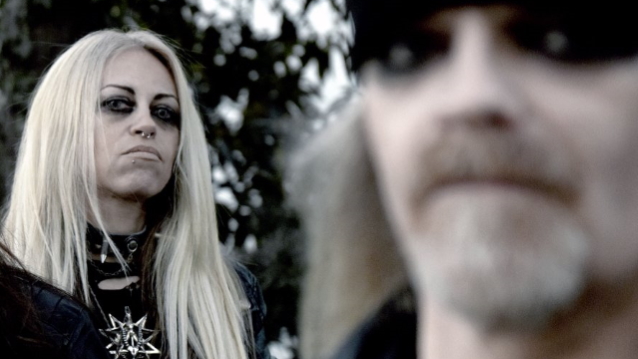 Mia Wallace has responded to a recent interview with Thomas Gabriel Fischer (a.k.a. Tom G. Warrior) in which the former CELTIC FROST frontman discussed the fate of their NIRYTH project.

Earlier in the week, Fischergave an interview to Metal Wani in which he revealed that he and drummer Pidi Leuenberger left NIRYTH for "very, very important reasons, crucial reasons," adding that those same reasons were behind their decision to "dismiss" Wallace — whom he did not mention by name — from TRIUMPH OF DEATH, which revisits the music of his pre-CELTIC FROST band HELLHAMMER. Fischer went on to say that the material that was originally meant for NIRYTH — which he worked on "for one and a half years" and said was "some of the best material I've ever written" — would be changed "slightly" and released under a different name later in the year. He also explained that he didn't want to keep the NIRYTH moniker for the new project because he "wanted to have a clean start" and "didn't wanna have any bad feelings attached to it."

Earlier today, Wallace issued a statement disputing some of Fischer's assertions regarding how the NIRYTH project was conceived and accusing her former bandmate of trying to "create gossip by throwing mud at my person."

Mia's full statement reads as follows: "I write these lines to point out some of the statements that have been made recently and that I am involved in many interviews, not least in Metal Wani, appeared on BLABBERMOUTH.NET.

"After my departure from the band TRIUMPH OF DEATH, in a few months I continued my musical career in a very serene way, joining the band NERVOSA of the talented Prika Amaral, with great joy and enthusiasm I am working with her on the new album and we have planned numerous tours around the world; I have been collaborating with KIRLIAN CAMERA for years now, of which I am now a permanent member and I am working with them on the release of the upcoming album; the friendship between Abbath and me is always strong and has never stopped, I have admiration for him and him for me; I also have important collaborations with great artists who are not yet publicly official but who will be very soon. I’ve been building and running THE TRUE ENDLESS band for over 20 years in complete harmony and deep friendship until by a tragic fatality that took away my best friend's life, the band has melted.

"In light of this, I was really surprised to read the statements made in the last interview made by Tom G. Fischer for Metal Wani appeared on BLABBERMOUTH.NET, where I am labeled as a negative person whom he had to free himself to restore positivity; it makes me smile that an important character like him needs to create gossip by throwing mud at my person with vague references to 'very, very important reasons, crucial reasons that there was no way around it', also involving drummer Pidi Leuenberger, with whom I have never had any kind of problem. About this, I hope that I will never have to find myself in a position to make public the reasons for breaking cooperation with TRIUMPH OF DEATH and consequently the removal of the two components of NIRYTH, which would make Mr. Fischer absolutely embarrassed and less than favourite.

"Having said that, I express my total astonishment at the very fact that there is a desperate and constant need to create rumors from Mr. Fischer, instead of working on behalf of his projects serenely, but stating that he owns totally the music created by ME for NIRYTH of is a big fat lie: we both have evidence that the project was initially born as MY personal project, originally thought to be totally composed of women; the music created is the result of more than 20 years of my ideas that had not yet come to life because I played in a band (THE TRUE ENDLESS) dedicated mainly to Black Metal with a very primitive and aggressive style. These songs of mine instead were born from a feeling of love and female rebirth that I have always tried to achieve.

"When I subjected to Mr. Fischer my pieces, he recognized the value of them, and after a few months he proposed to sing on my music. Since then we have met almost I find myself constantly traveling between Italy and Switzerland, almost once a week, to carry on the project, with great economic expense from me. When the songs have been completed, drummer Pidi Leuenberger was called to record the drums on the pieces recorded predominantly by me in Victor Sanctura's studio, and last, Mr. Fischer's voices were added. The songs are recorded in proportions of 50% and 50% (Fischer/Wallace) regularly in Gema, mr. Fischer owns the 100% of the lirycs. Now I wonder how they will be 'transformed' or modified to erase my motherhood into a project that was born from my heart, and that is the result of years of pain and passion put into music.

"My NIRYTH project is close to publication, with important and amazing collaborations of talented artists, with new and totally irresistible material.

"I hope that this statement of mine will be sufficient to put out these defamations permanently, which give a completely distorted and unrealistic view of the facts, as well as being nonprofessional and disrespectful to me."