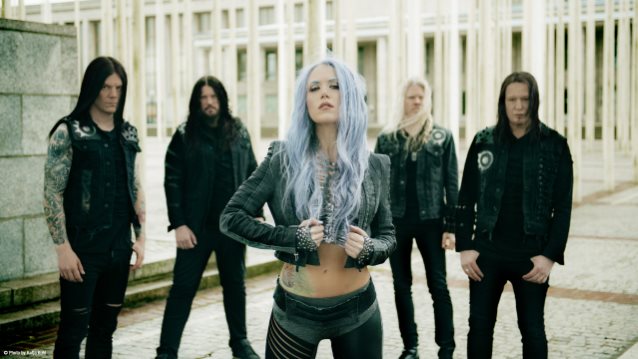 MICHAEL AMOTT On Not Writing With JEFF LOOMIS: 'He Has A Great Style, But It's Not Really ARCH ENEMY Style'

ARCH ENEMY guitarist Michael Amott was recently interviewed by Greece's Rock Pages. The full chat can be streamed below. A few excerpts follow (transcribed by BLABBERMOUTH.NET):

On not including guitarist Jeff Loomis in the writing process for new album "Will To Power":

Michael: "I write all the music with Daniel [Erlandsson], our drummer, like I've done for many years. I co-wrote one a little bit with my brother as well, Chris. Like the ballad, 'Reason To Believe', came out of a jam with my brother. Jeff has a great style, but it's not really ARCH ENEMY style. He's got a great style. I really, I'm one of the original NEVERMORE fans. I've toured with them back in the day before anybody really listened to NEVERMORE. I had their demo tapes before they made albums. That's how far I go back with them. But, it's just a different style of writing. It's very dark, very progressive. And I think it's really fucking cool, but it's not really ARCH ENEMY style… at this time."

On the band's continued growth:

Michael: "We've had an interesting career, in a way that every album has been bigger and bigger for us, but it's been quite slow. We made a few big jumps, like, between 'Burning Bridges' to 'Wages Of Sin', we made a big jump... and then after 'Doomsday Machine', we made a big jump in America. Some albums have been more popular in Japan. You can't please everybody. But we've had a very consistent career, and [we've] been lucky enough to grow a solid fan base, a very solid fan base, all over the world. I like all the albums — they all tell their own story; they have their own place in our history as a band. The new album has been going down very, very well; the reactions are phenomenal to 'Will To Power', but I think that's coming off the back of a huge world tour for 'War Eternal', which was close to three hundred concerts all around the world. There's not a lot of bands that do that. Now we have a really strong fan base, and we have an exciting element with Alissa [White-Gluz] fronting the band — she's phenomenal — and great music behind it, of course."

On what White-Gluz brings to the band:

Michael: "With Alissa, we have a singer who's got a phenomenal — there comes that word again — voice, both clean and brutal vocals. She can do both, and when you have that in your tool belt as a band, why not use it? I don't think we'll ever be a band that focuses mainly on clean vocals. I think we'll always have a heavy, extreme edge to the band. The band has always had a lot of melody. Even on the first albums, there's a lot of melodies, but it's primarily coming from the guitars. The way I write, there's a lot of melodic guitar work, and the vocals have been kind of brutal. Now, there's some things changing, so we can have some melody in the vocal, and just change things around a bit."

"Will To Power" was released on September 8 via Century Media. Co-produced by Amott and Erlandsson, the disc was mixed and mastered by longtime collaborator and friend Jens Bogren (OPETH, AT THE GATES, DIMMU BORGIR). The album's cover artwork was designed by Alex Reisfar.

"Will To Power" marks the second ARCH ENEMY album since the departure of longtime singer Angela Gossow and addition of White-Gluz. It will also be the first ARCH ENEMY disc to feature Loomis, who joined the band in late 2014.