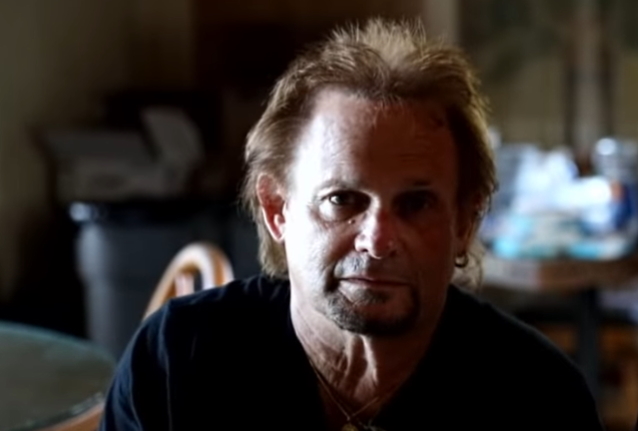 In a new interview with Guy "Favazz" Favazza of the St. Louis, Missouri radio station KSHE 95, former VAN HALEN bassist Michael Anthony was asked about Wolfgang Van Halen's recent revelation that Eddie Van Halen had contemplated a "kitchen-sink tour" that would have included Anthony, as well as vocal turns from both Sammy Hagar and David Lee Roth. There was even talk about bringing back Gary Cherone, who sang with VAN HALEN on one poorly received album, 1998's "Van Halen III".

"I actually did get a call from [the VAN HALEN] camp — actually, [from manager] Irving Azoff's office — I don't know… three or four years ago… a few years ago now," Michael said (hear audio below). "And they did ask me about coming back and doing a reunion. And things kind of were progressing, and then, I guess, Eddie was kind of ill — he was going over to Europe and having some treatments done or whatever. And it never materialized. I think he was too ill."

Asked if he has spoken with Wolfgang in the three months after Eddie's death, Michael said: "No, I haven't actually spoken to Wolfgang yet. I obviously didn't want to talk to them. I spoke briefly with Alex [Van Halen, VAN HALEN drummer and Eddie's brother] right after Eddie passed, but I wanted them to have their privacy. And I have texted with Wolfie a couple of times, and everything is all good, obviously."

As for his current relationship with Alex, Michael said: "We spoke briefly after Ed's passing, but Alex has been pretty much grieving, or however you wanna put it, pretty much been to himself. So I'm just kind of letting that happen, and I'm sure at one point we'll talk again here or even get together."

According to Wolfgang, the original plan for the VAN HALEN reunion tour was for him to personally contact Michael and ask him to come back. "Unfortunately, Irving hit [Michael] up before I had a chance to," he said. "The plan was for me to [reach out to him]." Wolfgang went on to say that he was also the one who called Roth in 2007 to get him to return to VAN HALEN for a reunion tour.

VAN HALEN and Anthony had not been on good terms for more than a decade, with Anthony not invited to join the reunion with Roth that began in 2007. The subsequent two tours and studio album, "A Different Kind Of Truth", featured Wolfgang on bass.

Eddie died on October 6 at St. John's Hospital in Santa Monica, California. The iconic VAN HALEN axeman passed away from complications due to cancer, his son confirmed.