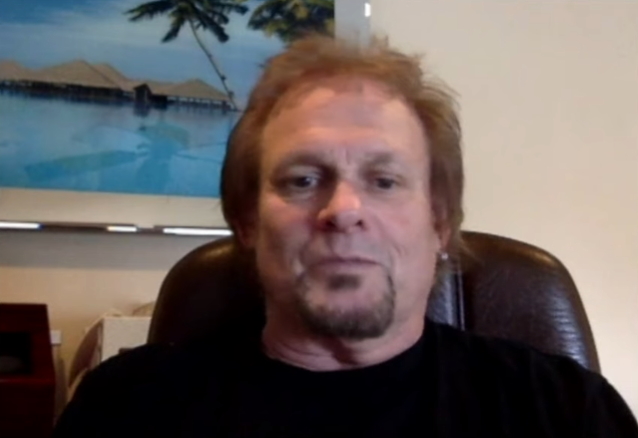 In a new interview with "The Jeremy White Podcast", ex-VAN HALEN bassist Michael Anthony confirmed that there has been talk of putting together a career-spanning box set from his former band, including rare and previously unreleased bonus material. "I know Warner has brought up the question, would we like to do that, as far as like a box set," he said (as transcribed by BLABBERMOUTH.NET). "Obviously, it all happens after Eddie [Van Halen, VAN HALEN guitarist] passed, and it's, like, 'Hey, let's cash in on this and that or whatever,' which I don't want any part of that… But I know there has been some talk about doing a box set and redoing some stuff, but I think it's kind of in the early works, and nobody's really talked that much about it yet. But I'm sure, and I also hope, that that will happen."

Anthony also talked about the possibility of remixing and remastering some of the classic VAN HALEN albums in order to bring out the bass and make the mix sound more "modern." "Of course, it's tough with Ed not being here, to be able to go in, as far as doing anything with the guitar, which you really don't need to, because his guitar sound is always incredible," he said. "But I'm sure, at some point, we'll get together possibly with Alex [Van Halen, drums] and maybe Ed's son Wolfgang and do something like that. I think it'd be a great thing to do."

VAN HALEN and Anthony had not been on good terms for more than a decade, with Anthony not invited to join the reunion with singer David Lee Roth that began in 2007. The subsequent two tours and studio album, "A Different Kind Of Truth", featured Wolfgang Van Halen on bass.

Anthony took a pay cut and signed away all of his rights to the band name and logo in order to participate in VAN HALEN's 2004 tour, which featured Sammy Hagar on vocals.

Last November, Wolfgang revealed that Eddie had contemplated a "kitchen-sink tour" that would have included Anthony, as well as vocal turns from both Sammy Hagar and Roth. There was even talk about bringing back Gary Cherone, who sang with VAN HALEN on one poorly received album, 1998's "Van Halen III".

Eddie died in October at St. John's Hospital in Santa Monica, California. The iconic VAN HALEN axeman passed away from complications due to cancer, his son confirmed.