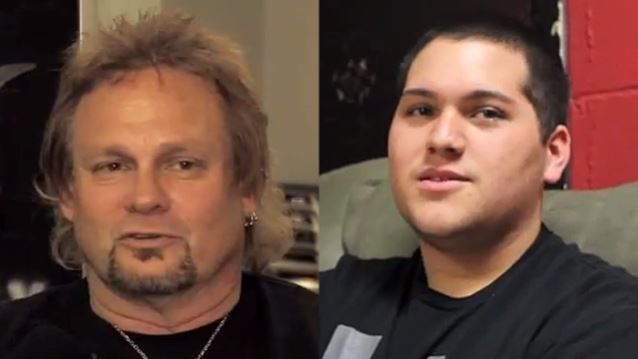 For Bass Players Only's Jon Liebman conducted an interview with Michael Anthony (VAN HALEN, CHICKENFOOT) before a recent concert with Sammy Hagar in Michigan. You can now watch the chat below.

Asked about his thoughts on Wolfgang Van Halen replacing him as the bass player in VAN HALEN, Michael replied: "I think he's a great kid. I mean, obviously, I've known him since he was born. He's a great musician. He's a great bass player. He plays drums, guitar, bass and sings. His dad, Ed, wanted his son to play with him, so, you know, that's, you know, totally great. I mean, I found out that he was going to be playing bass [in VAN HALEN] with everybody else… when they did their press conference. I wished him luck in a couple interviews I did, and hopefully he read those."

Asked about VAN HALEN singer David Lee Roth's interview with Rolling Stone magazine in which the frontman said he wanted Anthony back in the band, the bassist told "Eddie Trunk Live" back in April: "It was flattering to hear Dave talk like that. He never used to talk like that when we were all playing together. [laughs] But hey… I really don't know what to say to that. It was flattering that he said that. And, obviously, I'm the kind of guy that… water under the bridge. I don't hold any kind of grudges for anything, and you never know what will happen at anytime…. At this point in your life and career and whatever, the career aside, it's more about the friendship and just people. And if the music side of it, if that happens, if that comes about, all the better, but that's not what it's really about at this point."

During the Rolling Stone interview, Roth touched upon the touchy subject of Anthony replacing current bassist — and Eddie Van Halen's son — Wolfgang Van Halen, from here on out. "But Ed has his own vision, I'm assuming," Roth said. "We haven't really been able to speak about it and it's a disappointment, just as not having a chance for a reunion of the original band. Clearly, vocals are every bit as much a component of success as a rhythm section or a guitar solo. . . what we have at our fingertips is arguably one of the greatest high tenor voices ever — that was in Michael Anthony. In our tiny little corner of the universe, that voice is as identifiable as the high voice in EARTH, WIND & FIRE, as identifiable as the high voice in the BEACH BOYS. VAN HALEN is an indelicate house blend of both — that's intentionally."

Anthony and Hagar both last played with VAN HALEN on a 2004 reunion tour that ended acrimoniously. Both maintain that Anthony was booted from VAN HALEN for maintaining a friendship and working relationship with Hagar.

Hagar told The Pulse Of Radio that he thinks VAN HALEN made a grave mistake leaving Anthony out of the reunion tour with Roth. "Anyone in their right mind would know if you're gonna get Roth back finally! after all these abortions they've had, you get Mikey and you do the reunion tour, what the world really was waiting for. Not just fuck it up again. It's almost like they don't care about their fans. They just want to badger them until — see how much they'll take."