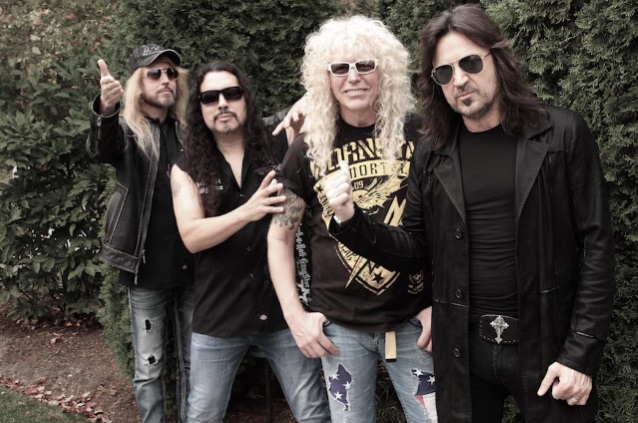 STRYPER frontman Michael Sweet spoke to ListenIowa about the band's latest addition, former FIREHOUSE bassist Perry Richardson. Perry joined the band as the replacement for STRYPER's longtime bassist Tim Gaines, who was fired from the group earlier this year.

Regarding how STRYPER hooked up with Richardson, Michael said: "Our co-manager mentioned [Perry]. We were talking with Sean McNabb [LYNCH MOB] and I had a brief conversation with Chris Wyse, who plays with Ace Frehley and THE CULT. I love James LoMenzo [MEGADETH, WHITE LION, BLACK LABEL SOCIETY], who could have been a great fit, too. But there's so much to think about, so when Perry's name got thrown out there, it was one of those, 'I never thought of that' things. I reached out him, and scheduled a flight. We jammed, and it felt right. No one was uncomfortable. We haven't known him long, but from what we have heard from the people who have known him all their lives is that he's a great person. He came in, learned five of our songs, and locked right into the pocket with Rob [Sweet], who is one of those drummers who adds a lot and is a little more difficult to follow. Perry nailed it. We sang harmonies, and it sounded like the album."

According to Sweet, STRYPER "originally made the decision over the phone" to hire McNabb. "He's a wonderful guy," Michael explained. "Talented. But he's got the LYNCH MOB gig, and they're going to be very busy next year. We just fell like that, after talking to George [Lynch] and Oni [Logan], we just didn't want to go there. We're really trying hard to run away from any kind of drama. Any time we feel any form of drama is coming our way, it's, 'Boom! We're out,' believe it or not."

Michael also talked about the progress of the writing and recording sessions for STRYPER's follow-up to 2015's "Fallen" album. He said: "It's all done. I came home from a recent four-show acoustic run in California, took a day off on Monday, and then Tuesday I set up all my gear. I had my computer, my speakers, my little iPad with my guitar rig in it, and I started writing. Within a week, I had everything. I've been tweaking since — a chord here or a lyric there — but everything was done within a week. Oz [Fox, guitar] sent me some ideas, two of which ended up being used for the album. It's like a puzzle and fitting the pieces together and getting things to flow. We have a title and a title track. It's shocking, moreso than with 'To Hell With The Devil'. When people hear it, they're going to go, 'What? Can you tell me that again?' A lot of the lyrics on the album have been kind of therapeutic, coming from the last two or three years."

Sweet went on to clarify that both the title of the album and the lyrics of the title track will be "shocking" to STRYPER fans. As for the music, he described it as "straight-up STRYPER and a little AC/DC and a little [JUDAS] PRIEST in a blender… It's an anthem with a straight-ahead, memorable, sing-along chorus, and people will be like, 'Yes!'"

Gaines's exit from STRYPER had been rumored for months, ever since Fox revealed that Tim was going through a divorce, forcing the group to take a hiatus and possibly consider a future without the bassist.

Gaines told KNAC.COM in August that "all hell broke loose" after he split up with his previous wife, "which is taboo as far as Christianity, I guess." He added: "I'm not the only guy in STRYPER to have gotten a divorce. Everybody in the band is married to divorced people. And I'm the bad guy, but everybody else has done it too, so? Whatever. Live in glass houses and everything will be exposed at some point or another."

A few days later, the remaining members of STRYPER released a statement denying that Gaines's divorce was a factor in their decision to part ways with the bassist and blaming Tim's "erratic and hostile behavior" for his dismissal from the group.