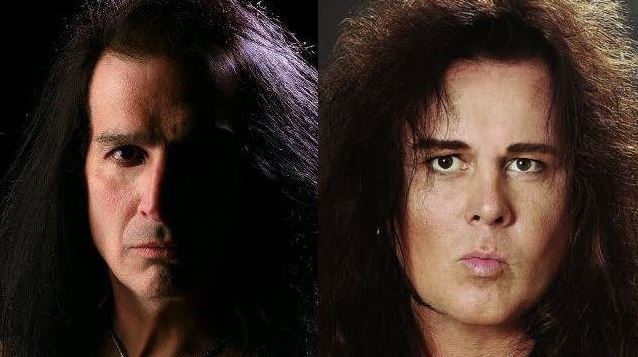 Former YNGWIE MALMSTEEN singer Michael Vescera says that the legendary Swedish axeman "could have been the biggest guitarist in the world today" had he not "destroyed his career" by "burning bridges and pissing people off."

During a press conference in São Paulo, Brazil for last month's "Metal Singers" tour, Vescera — who recorded two full-length studio records with Malmsteen as well as an EP, various videos and the "Live At Budokan" DVD in the 1990s — stated about Yngwie: "[Fellow former Malmsteen singer Tim 'Ripper' Owens and I] talked about Yngwie earlier a little bit. We have a lot of stories, a lot of crazy stuff [that happened] with Yngwie. But I think the main thing with Yngwie — Ripper and I were talking about this earlier — Yngwie could have been the biggest guitarist in the world today, by far. And he's destroyed his career, just by burning bridges and just pissing people off. And it's unfortunate, because he changed the face of guitar. And to be where he's at today is kind of sad."

He continued: "But, look, I don't have anything bad to say about Yngwie. It was an experience. There was some crazy shit that went on. But I wish him well, and I hope he straightens out his stuff and comes back. But… you know, we would need about two years [to tell our] stories [about] him."

Owens, who also took part in the "Metal Singers" tour and press conference, then took the microphone and said: "I will add, though, that Yngwie loves playing guitar. We got along really well when I was in the band. But I've never been around someone that loves to play and has a passion for playing an instrument like he does. [He's the] most talented guitar player I've ever been around. I mean, he loves to play. He will sit and play guitar… There's a guitar around every piece of furniture in his house. He will pick up a guitar and play it all day long. And it amazed me. I learned a lot from that, because it was kind of nice to see. It's been a while since I saw somebody with that passion. I mean, he is the best and he loves to play. So, I mean, it's pretty amazing."

In a 2013 interview with Guitar World, Yngwie was asked how he responds to the people that accuse him of being arrogant. "I tell them to fuck off!" he replied. He continued: "I saw an old interview with QUEEN on TV recently, and Freddie Mercury and Brian May were talking about how they were when they started: arrogant, cocky and convinced they'd conquer the world. You have to be like that if you're really gonna make it. If you're timid, laid-back and quiet, you have less chance of being noticed. So maybe there was an arrogant side to me when I started out. You have to be cutthroat and go for it all the way. Obviously, I don't have a need for that anymore. I just do what I do."