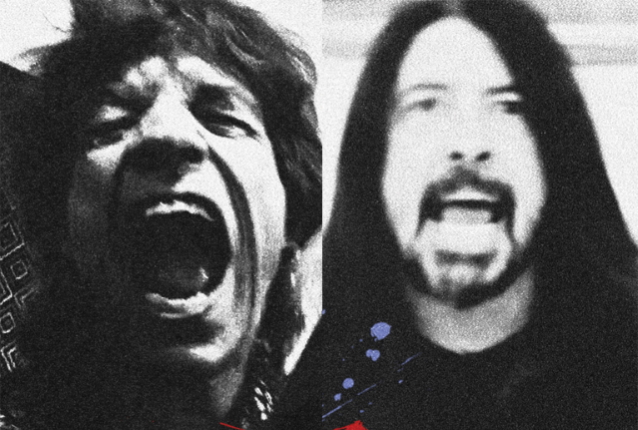 Mick Jagger today unveils an exciting surprise for his fans worldwide in the form of the instant release of a track titled "Eazy Sleazy". The hard-rocking tune written by THE ROLLING STONES singer in lockdown features Jagger on vocals and guitar in collaboration with FOO FIGHTERS mainman Dave Grohl providing his signature powerhouse drums, guitar and bass too. The song was produced by Jagger's longtime musical collaborator Matt Clifford, who also produced Mick's two 2017 songs, "Gotta Get A Grip" and "England Lost".

The infectious "Eazy Sleazy" is every inch a song of our times, full of caged energy, a rock 'n' roll attitude and tongue in cheek, satirical messaging. Jagger muses about the life we've all been living with deliciously dark sardonic humor. He reflects on a world of "Zoom calls," "home in these prison walls," poncey books, fake applause and too much TV. With optimism and change in sight, he looks forward to the world beyond lockdown and the "garden of earthly delights" that lies beyond.

A performance video for "Eazy Sleazy", produced by Matt Clifford, featuring Jagger at home and Grohl in the FOO FIGHTERS studio, can be seen below.

Regarding how he decided to approach Grohl to work with him on the song, Jagger told Consequence Of Sound: "I thought, 'Who is very experienced in working from home, and I could work from a distance with, and could really get into it?' And I thought Dave would be a great person to do that, as he's such a great drummer. I really wanted some live drums, so that's why I thought Dave would be great on it. I just got him up, and he said, 'I'm going in tomorrow to do it.' I said, 'Okay.' He did bass and some guitar parts, and I had done some guitar parts. So, we did it pretty quickly."

He continued: "I had done the demo, and it was pretty much set the way it was going to be. We worked on the way I'd done the demo. Then I said, 'Just play to that.' So, he did the drums first, and he totally got the vibe of it straight away. He just likes to rock hard. It's what I like. It's to the point where we're not messing around, and it's very incisive. He's a really easy, very enthusiastic guy to work with, so I enjoyed that. It didn't take long. In a couple sessions, it was done."

Dave commented: "It's hard to put into words what recording this song with Sir Mick means to me. It's beyond a dream come true. Just when I thought life couldn't get any crazier… and it's the song of the summer, without a doubt!!"