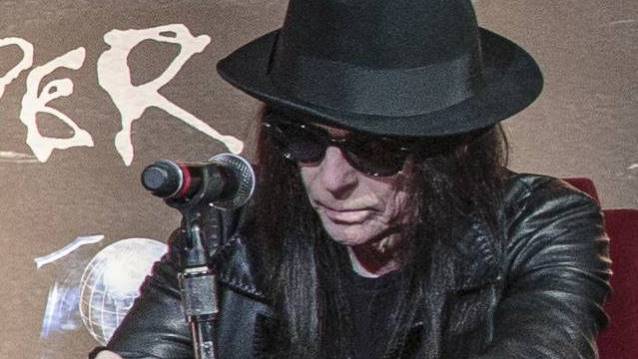 MÖTLEY CRÜE guitarist Mick Mars has once again dismissed reports that his poor health is partly to blame for the band's decision to retire from touring.

Speaking to Artisan News, MÖTLEY CRÜE members Mick Mars and Tommy Lee (drums) were asked to explain the reason for the band's decision to quit touring.

"You know, at some point, your work here is done," Lee said (see video below). "We've proven it to ourselves, we've proven it our fans, we've outdone ourselves. I mean, there's not much left for us to do but go say goodbye to everybody."

Added Mars: "I mostly get the health-reason thing. It's because I have ankylosing spondylitis, and you can physically see that in me, 'cause it distorts your body. It's a form of rheumatoid arthritis. I'm not gonna go too much into it, but I'm just explaining how it is. It doesn't stop me from touring — I'm gonna be touring a long time after MÖTLEY CRÜE. It is a bit of an inconvenience; sometimes it's rougher than other times. But my health is perfect. I mean, I go every six months to get a checkup. And I'm in really good shape and good health. The only thing is you can see what I have. Luckily… I feel lucky about that. 'Cause a lot of people have heart disease and other stuff like that and they don't even know it. And they keel over on stage or whatever… That would be scary to me."

Singer Vince Neil was asked why the band decided to call it quits now after more than 30 years. "We started talking about it a few years ago," he said. "You know, we didn't want to be one of those bands that maybe have one guy left in it or somebody's brother or something like that. You know, we wanted to be — we want to go out with the four founding members of MÖTLEY CRÜE and go out on top, and leave a legacy of a band called MÖTLEY CRÜE."