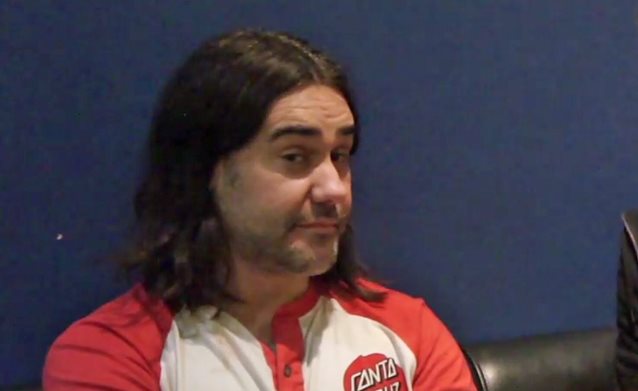 Dann of the "Mike James Rock Show" conducted an interview with KILLSWITCH ENGAGE bassist Mike D'Antonio during the band's current U.K. headlining tour. You can watch the full chat below. A few excerpts follow (transcribed by BLABBERMOUTH.NET).

On if there exists the possibility of shows with former singer Howard Jones:

Mike: "We could, but whether we want to or not is a different story. There's no real reason to be mean or nasty or throw people through the mud. Things didn't work out. That's the way life is. We're not mean guys. It's just the natural way of things to still be friends with somebody. You're not going to cut that off because things didn't work out on the business side of your relationship."

On why KILLSWITCH ENGAGE has never been about the "drama":

Mike: "Some bands thrive on it. It makes no sense to me. Why would you want that much…? It's just too much emotion or energy for no give-back."

On how the band's new "Incarnate" album has been received by fans after its March 2016 release:

Mike: "It seems to be going well. People are singing along; we're putting as many [songs] in the set and people are online asking for more, so that's always a good sign. [2013's] 'Disarm The Descent' could have been our last record ever and I think it was written in that way. We didn't have a vocalist when we were writing it; we weren't sure how it was going to go. In my personal life, we had taken so much time off between the one before it and that one that I just wanted to write, I just wanted to be onstage, I just wanted to do something. I started a new band called DEATH RAY VISION with my old pals from a band called OVERCAST that I was in, just to get out and play. I didn't care if it was in front of two people, I just wanted to play. I think a lot of angst seeped into the stuff I wrote for 'Disarm The Descent'. Now it feels like a community again. It feels like a whole family and everyone is happy. There is not really as much angst as there was for that record. I think you can tell.

"I think we expelled all we needed to get rid of, then it was just happy times again. If that's good or bad for the fans, I don't know. I like the mean stuff, too. I think the only information we talked to each other about when writing this past record was 'Let's explore.' We don't have to stay in this box. We can venture out a little bit."

On if the band is thinking about a new album:

Mike: "We are thinking that we've toured our butts off and it might be time for a rest, and maybe doing less touring and more albums might be the way to go for us. That's our mindset right now. The talk is, we have this Australian tour in March, then another huge, our last 'Incarnate' tour in America with a really big band that I can't really announce yet. [Editor's note: Referring to the just-announced American tour with ANTHRAX.] We're super-excited about it. It's going to be really fun; awesome guys. Right after that, the tour ends May 7, from then on, it's going to be writing again for the next record."

On the most important aspects of being in KILLSWITCH ENGAGE:

Mike: "Having fun and being able to smile onstage is the number one priority. Granted, you can't make money with records these days and we're planning on making more of them. [Laughs] But our sanity is definitely in question right at this moment. We need to get back to a reset button."

On the band's use of social media to connect with their fans:

Mike: "Jesse [Leach, vocals] loves the Internet. I do as much as I possibly can, but I really like a little bit of anonymity. I don't want people to know when I'm leaving for tour so they can rob my house. I have a home life that I like to keep separate from all that stuff, so I do as much as possible. But yes, the other guys are very anti-social media. Not because we don't want to tell you guys what is going on, but people like to have their own lives."