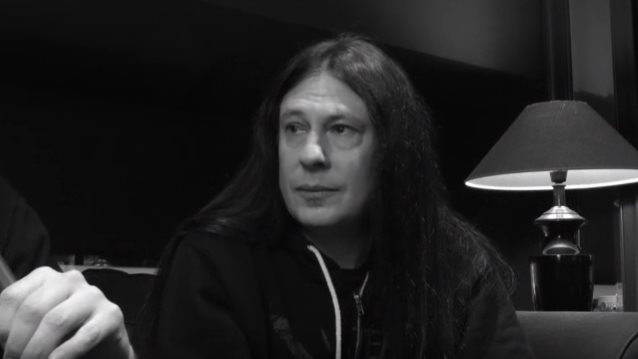 Finland's Kaaos TV conducted an interview with drummer Mike Mangini of progressive metal giants DREAM THEATER before the band's February 27 concert at the Icehall in Helsinki. You can now watch the chat below.

Speaking about his role in the DREAM THEATER songwriting process, Mike said: "I am not yet… Let's put it this way: That's the difference, on one level, between Mike [Portnoy, original DREAM THEATER drummer] being in the band for so long and then me coming in is that he's vested in that, so he's part of the arranging and part of all that, while as I observe now — being an observer — John [Petrucci, guitar], Jordan [Rudess, keyboards] and John [Myung, bass] are writing the music. I have to say this the right way, but they are — they are writing the music. Their instruments demand it. Drums don't write songs, you know, like that, but you affect the songs. I'm sure the role I had on the self-titled album was something similar to what Mike [Portnoy] was doing, but way not as involved. I was involved as a drummer, but how much can I suggest? I have to say what? 'Oh, sound like this.' 'Play that.' 'let's do three of these, five of those.' But it's still the other guys making those chord progressions. You understand what I'm trying to say? So the difference, if you're wondering, that's gotta be a big difference… Mike's part of it; he's involved in those arrangements and things more than I have been yet. But understand something: I've entered a few bands, and I watch a lot of sports. You don't show up on somebody else's team demanding… You don't demand respect — you earn it. It takes time. And so little by little, I'm doing what I'm asked. I'm doing a little bit more, and that is where it is a different thing."

He continued: "When the music is composed, and it has largely not been composed with me… Two out of three albums, and even a lot of stuff on the album I was on, not yet composed with me. I can compose full songs, and I'm doing it, but, again, I'm trying to earn respect little by little here; I'll get in there. But the bottom line is that the other guys are composing as they always have. And this time now, if they're putting together a song, and they feel that the music, a song, needs to be presented a certain way with a certain feeling, that means that the drummer has to play to external time. So that is a huge difference, where I, in my whole life, have submitted to this. I submit to the composer, like, 'I would like it like this,' and, 'I would like it like that,' and, 'I would like it like that this.' I mean, I worked with Steve Vai. He practically… In a lot of cases, he's, like, 'Can you hit the splash cymbal on the seventh note of that eleventuplet?' 'Can you do an eleventuplet in that space?' And I'm, like, 'Yeah!' And I loved it now that that has been my career, and I've enjoyed it. It has to be real; you can't be fake with these things."