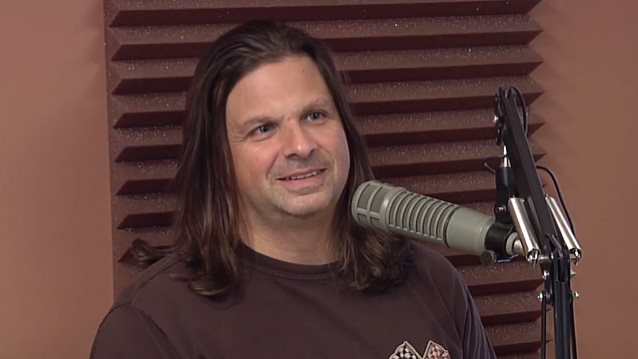 The encore of this past Friday's (August 4) Aaron Lewis And Friends benefit concert at Pines Theater at Look Park in Northampton, Massachusetts featured three original members of STAIND — singer Aaron Lewis, guitarist Mike Mushok and bassist Johnny April — with current drummer Sal Giancarelli playing a three-song acoustic finale that included "Outside", "Something To Remind You" (see video below) and "It's Been A While".

Over the weekend, Mushok spoke to iRockRadio about the performance and the current status of STAIND, which hadn't played live in three years prior to Friday's event.

Asked if there had been any talk of STAIND doing more stuff in the future, Mushok said (see video below): "We talk about it. We've been talking about it. It's just timing needs to be right for it to happen."

Pressed about whether a STAIND comeback would include the release of any new music or if it would only consist of live shows, Mushok said: "See, that's the biggest question. That's the thing — there's definitely different hurdles and things that we need to figure out to get to that point. I'd definitely like to do new music."

After confirming that STAIND doesn't have a record label at the moment, Mushok said: "I don't think it's necessary for us to do a ten-song record. It's just so much work to get a good record done. [And albums] don't sell at all. You get the same bang for the buck if you put out one or three [songs], or whatever it is — as long as it's great."

The guitarist then repeated himself: "So… I don't know. These things need to kind of be figured out. And we'll see. Hopefully it happens sooner than later."

STAIND has been mostly inactive since 2011 and Lewis said in a recent interview that the band is probably going to stay that way for the foreseeable future. He told Planet Weekly: "I definitely see it staying on hold for a while. I've got to stay focused on this [country career]. I've got to take this to where it needs to get to before I can start risking things with the good ol' boy network reception and throwing in a handful of STAIND shows in the summertime along with all of my country shows. But that's down the road. I can't even think about that right now."

Lewis made his debut as a country artist with the 2010 EP "Town Line", which he followed up in 2012 with his first full-length solo album, "The Road".