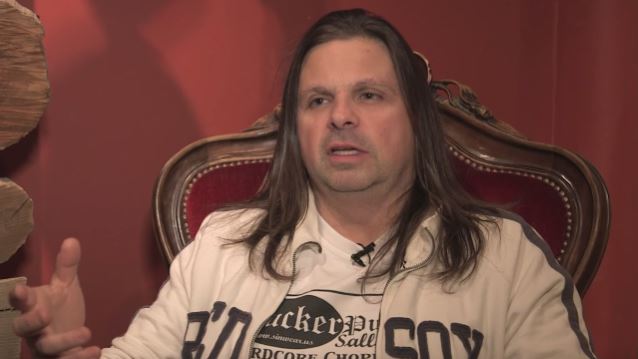 STAIND and SAINT ASONIA guitarist Mike Mushok was interviewed for a recent episode of the "Metal Brainiac" podcast. You can now listen to the chat using the SoundCloud widget below. A couple of excerpts follow (transcribed by BLABBERMOUTH.NET).

On whether it caught him off guard when STAIND singer Aaron Lewis went off and launched a country solo career:

On whether he always wondered when Aaron would eventually split off and pursue a solo career full time:

"He would go and do solo shows. And, listen, I'll always say, somebody has to be happy with what they're doing. And I can't say to Aaron, 'Look, man, we've been…' I mean, I can say, 'We've been a band for twenty years. You have to come do this.' He's gonna resent me. He's gotta figure out what he wants to do and what makes him happy. And if it's going and writing country records and playing country music, then that's what he's gotta do. I mean, it would be easy to come and do another STAIND record, because we've done it. I know we can do it again, and hopefully some day we will. But he's gotta be happy with what he's doing. And until he's happy and says, 'Hey, man, I really wanna make a STAIND record,' it's not gonna benefit anybody. If you're gonna do it, you've gotta be a hundred and ten percent committed to it. And I have to work. I enjoy writing, I love writing, and I love the record that I made with [SAINT ASONIA]."

On whether he ever entertained the idea of getting a new singer for STAIND since Aaron was busy with his solo career:

"No. I had people telling me that too. And I'm, like, 'I'm not gonna… It doesn't make sense.' I mean, STAIND is so associated with Aaron's voice. Although I guess you could say the same for JOURNEY too, and they did it. We're not JOURNEY — don't get me wrong — but it was nothing that I ever entertained. I don't think I'd ever entertain that thought. To me, STAIND is the music I write and the lyrics that Aaron puts to it. And I don't know about somebody else coming out and singing those songs. Personally, I think that's what it should be. That being said, I'm not gonna say that SAINT ASONIA… We'll probably play a couple of STAIND songs here and there. But it's not going out as being STAIND and playing only STAIND [material]."

On whether the music he is composing for SAINT ASONIA is what he would have been writing for STAIND:

"I don't know. I mean, you know, listen, I was real happy with the last STAIND record. In fact, I… Probably last summer, I was going to do something, and I was in the car by myself, which I never am — I always have my kids with me, or my family — and I was looking for an AVENGED SEVENFOLD CD; I thought I had it in there, and I wanted to listen to it. And I ended up coming across our last CD. And I ended up listening to the thing; I hadn't heard it in a few years. I was realy happy with the last CD we made. I thought we kind of found a good direction; we got back to where we started from, which was a little bit more aggressive, a little heavier, but yet with some nice melody. And that's what I've always liked. I'd like to think that that's what the SAINT ASONIA record kind of did, where there's some pretty heavy songs on there, but yet there's still moments of just some really pretty music. I like both of that. I love heavy music, but I don't love it all heavy all the time. You know what I mean? I like to have a little bit of… you know, take a little breath in there."

STAIND has not released new music since 2011 and has no plans to return to the studio. Mushok played briefly in 2013 with ex-METALLICA bassist Jason Newsted in his self-named band.