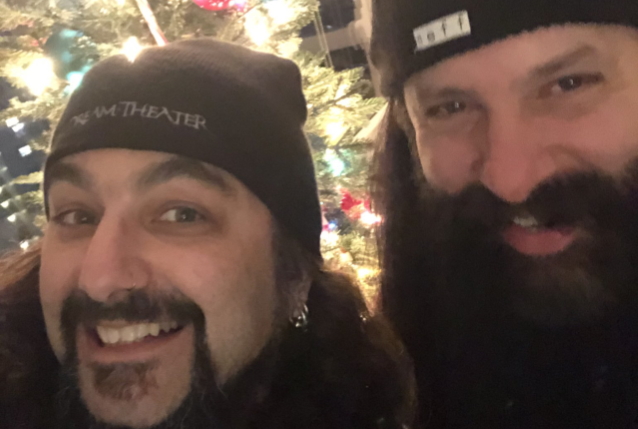 Portnoy revealed his involvement with "Terminal Velocity" in a social media post earlier today (Wednesday, July 1). He also shared the track listing for the effort and a video teaser, which can be seen below.

The cover artwork was created by Sean Mosher-Smith at Echo Designlab.

This past January, Portnoy said that he would "love" to make music with Petrucci again.

The drummer commented on the possibility of working with his former bandmate in DREAM THEATER just a couple of weeks after Portnoy took to his social media to upload two photos of him and the DREAM THEATER guitarist, along with their respective families, at what appeared to be the Christmas tree in Rockefeller Center in New York City.

Asked in a an interview with Myglobalmind if there are any plans to ever work with Petrucci again, Portnoy said: "We would both love it. We are a great team of 25 years as we were co-captains of DREAM THEATER and LIQUID TENSION EXPERIMENT. I would also go out with him on the 'G3' tours.

"I look back at the relationship we had, and it was very special from a drummer-guitarist relationship," he continued. "You can see that with Lars [Ulrich] and James [Hetfield] of METALLICA, Dimebag [Darrell Abbott] and Vinnie [Paul Abbott] of PANTERA, and Eddie and Alex Van Halen. I think John and I had that type of partnership.

"We are both at our best and strongest when we work together, and I miss that relationship, Portnoy added. "He and I have a great personal relationship now and get together with our families. It would be a shame not to make music in some capacity in the future. I hope we can."

After Portnoy posted a photo two years ago of him hanging out with Petrucci, many DREAM THEATER fans expressed hope that it represented a thawing of tensions between the two musicians who had been friends for more than three decades. But John played down the photo's significance, telling Music Radar: "Mike and I have maintained a relationship and have been friends all these years. Our families are all good friends, and we've gotten together several times. That just was the first time we took a photo and posted a photo. [There's] nothing to read into, other than it's good to maintain good relationships. That's really all it is."

Portnoy told "The Metal Podcast" that he and John had "actually reconnected" in recent years "and gotten together many times and had dinner together with our families." He added: "The reality is he and I have been friends since the first week in college back in September of 1985, so it's a relationship that goes back [34] years. And our families are all friends, our wives and our kids are all friends, we all grew up together, and that's never gonna go away.

Mike told Loud that he left DREAM THEATER because he wanted to expand his musical horizons. "[I didn't] want to go to my grave and just be the drummer from DREAM THEATER," he said. "I knew there was way more to what I had to offer."