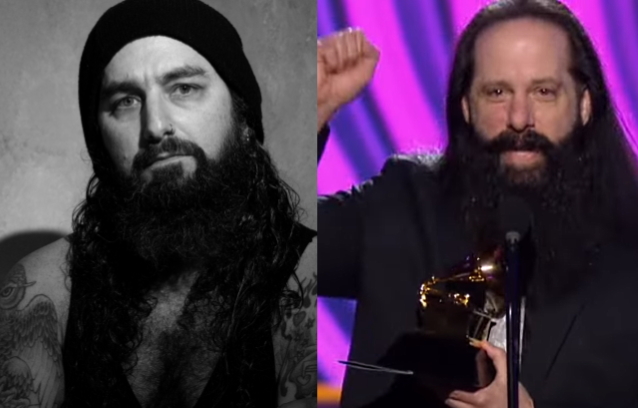 DREAM THEATER was honored with a Grammy in the "Best Metal Performance" category in the pre-telecast ceremony at the 64th annual Grammy Awards, which was held last night (Sunday, April 3) at the MGM Grand Garden Arena in Las Vegas. DREAM THEATER was nominated for "The Alien", a track from its 2021 album "A View From The Top Of The World".

Not long after news broke of DREAM THEATER's win, Portnoy shared an Instagram screenshot of Loudwire's coverage of the honor and wrote in a caption: "Congrats to my friends...Very happy for you guys!"

Keyboardist Jordan Rudess, who joined DREAM THEATER in 1999, replied to Portnoy's post: "Thanks buddy!! Thanks for hiring me many years ago!!!!"

This was DREAM THEATER's third Grammy nomination. The band's previous Grammy nominations were for the song "On The Backs Of Angels", from 2011's "A Dramatic Turn Of Events" album, and the single "The Enemy Inside" from 2013's "Dream Theater".

Portnoy, who co-founded DREAM THEATER 37 years ago, abruptly quit the band in September 2010 while on tour with AVENGED SEVENFOLD. He has since been replaced by Mike Mangini (ANNIHILATOR, EXTREME, STEVE VAI).

Back in 2012, shortly after DREAM THEATER was nominated for a Grammy Award a year after Portnoy's departure from the band, he told the Babylon, New York rock radio station WBAB about the nod: "It was a tough thing for me to see because I worked so hard for all those years to always fight to get the band mainstream acceptance and acknowledgement. We always did so well on our own for all those years — we kind of climbed the ladder on our own terms. We'd sell out Radio City Music Hall [in New York City] on our own terms. So we were doing things on our own terms and always hoping for, kind of, mainstream, commercial acceptance or acknowledgement. So to see it finally come a year after I left, it was heartbreaking for me on a personal level. On a professional level, I'm happy that it finally happened for the band. It was a long time coming; it should have happened many, many years ago. So, on one hand, it was, like, exciting that the band finally got recognized, but it was just kind of strange that it finally happened… the timing of it all — after all the hard work and blood, sweat and tears that I put in. But you know what?! Better late than never."

He continued: "I don't wanna sound bitter, but the reality of it is even all the years when I was in the band, I never really cared about the Grammys anyway; it was always like, 'F the Grammys.' To me, it was always a bit of a joke, and I never put that much weight or value in it to begin with. So I don't wanna come out and say that now and it's gonna look like I'm bitter because they got nominated, but the reality is, it's nice to get the tip of the hat, but realistically, that was never an important thing for me. I was always more concerned about how we did things on our own terms. . . I think, honestly, that the tip of the cap with that nomination was more of a career nod and the fact that DREAM THEATER existed and made such a splash on our own terms. I honestly don't think it had anything to do with just the new album ['A Dramatic Turn Of Events'] and that particular song ['On The Backs Of Angels']. I mean, of course, it's easy for me to say that, and I'll probably get [slammed] for saying that, but I think the reality is it was more of a career nod, and if so, if that's the case, then I think it's well deserved. Whether or not I'm there, I think the band really made its mark for what we did, so I think it deserves to be recognized."

Portnoy was a guest on DREAM THEATER guitarist John Petrucci's second solo album, "Terminal Velocity", which was released in August 2020 via Sound Mind Music/The Orchard. The effort marked the first time Petrucci and Portnoy recorded together in over a decade, as well as their first time playing together since Portnoy departed DREAM THEATER.

In a 2017 interview with Rockhok, Portnoy insisted that had "no longing to reunite" with DREAM THEATER but said that he would return to his former band "for the fans."

Since the 2010 departure of Portnoy, Petrucci, along with Rudess, has taken on much of the songwriting load for DREAM THEATER, including 2016's controversial double concept album, "The Astonishing", 2019's "Distance Over Time" and "A View From The Top Of The World".