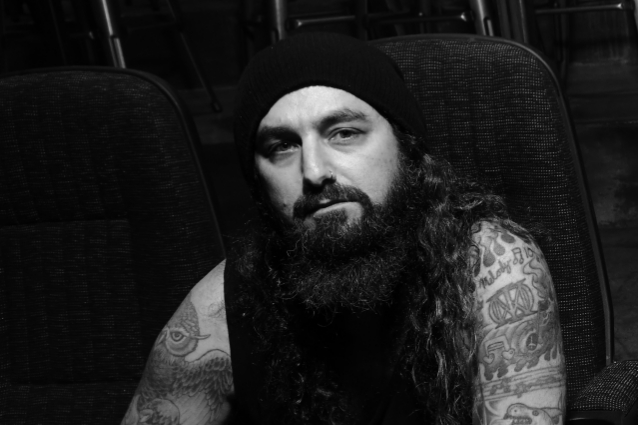 MIKE PORTNOY Looks Back On His Exit From DREAM THEATER: 'I Needed A Break From Those Guys'

Mike Portnoy spoke about his decision to leave DREAM THEATER during an appearance on the latest episode of "Drinks With Johnny", the Internet TV show hosted by AVENGED SEVENFOLD bassist Johnny Christ.

Following the passing of AVENGED SEVENFOLD's founding member Jimmy "The Rev" Sullivan in 2009, the band recruited his favorite drummer, Portnoy, to record the drum tracks for 2010's "Nightmare" album and all its tour dates before dismissing him at the end of that year.

Portnoy, who co-founded DREAM THEATER nearly 35 years ago, abruptly quit the band in September 2010 while on tour with AVENGED SEVENFOLD. He has since been replaced by Mike Mangini (ANNIHILATOR, EXTREME, JAMES LABRIE, STEVE VAI).

Reflecting on his time with AVENGED SEVENFOLD and his exit from DREAM THEATER, Portnoy told Christ (hear audio below): "I think we [AVENGED SEVENFOLD and I] were both what each other needed at that time. I think you guys needed to get back on your feet… That's the way I felt like — like I was there to help you guys. And you guys, whether you knew it or not, you were there at a good time for me too, because I was 25 years into DREAM THEATER at that point, and I was fried, and I was burnt. And I just needed a break. And touring with you guys was very refreshing for me, and it showed me that there's more out there than just the little DREAM THEATER bubble that I had been in for 25 years. So you guys were really good for me at that point as well; you kind of opened up my eyes to other things."

He continued: "I pretty much made the decision that I needed a break from those guys; I needed to be able to explore other things, whether it be with you guys, or if it was not with you guys [but] with something else. And I knew that — I knew that it wouldn't necessarily work out between you guys and me, because I didn't know if you were ready to make a commitment. And I knew that the whole DREAM THEATER thing sparked up so much drama at the time, with all the Blabbermouth headlines. Any time I did an interview, it became a fucking headline. It was horrible, and believe me, I never wanted that. And I'm sure, for you guys, that became a huge distraction. I've always been a social media guy — that's always just the way I've been — and I know you guys keep that shit in check. I could tell the way it was going down that you guys wanted to stay focused on Jimmy's legacy and whatever you were gonna do next, and I get the fact that the timing wasn't right. But for me, it didn't matter. If it wasn't gonna be with you guys, I needed to do other things with other people — that was just what I needed in my life and my career."

Portnoy added: "DREAM THEATER was on my back to make commitments to a time table, 'cause they wanted to go on. And I just wasn't ready to make those commitments. So, anyway, what happened happened, and at that point, I finished after a year with you guys, and then at that point, you guys moved on and I went on to do what I've been doing ever since now. It's been over nine years and I've got dozens of different bands and projects. I've put out literally 40 albums since that time. Even DREAM THEATER — and I'm not saying this to [criticize] them — but even they have only put out four albums since I've been gone. And I think I just needed more than that. I needed to be able to play with METAL ALLEGIANCE and FLYING COLORS. And then I went and I played with TWISTED [SISTER] after you guys, after they had a similar situation with A.J. [Pero] passing. After the experience I had with you guys, walking in with TWISTED was a very similar thing as well — those guys were still hurting; they wanted to honor his legacy. So I knew how to handle that. And I also did gigs with STONE SOUR and all these other bands, METAL ALLEGIANCE. And all the bands I put together — THE WINERY DOGS, SONS OF APOLLO, FLYING COLORS. So it's been an incredible ride, and I wouldn't have changed a thing.

"I have this tattoo here that says 'No Regrets'. Everything happens for a reason. And whether or not it worked out with you guys, or whether or not it worked out with the DREAM THEATER situation, everything happens for a reason. And I couldn't be happier with the path I've been on since that experience with you guys. And I'm grateful for the experience I had with you guys, but I'm also grateful for the way it worked out that you guys went on to do your thing. And you played with two great drummers now, and Brooks [Wackerman] is amazing — he's perfect for you guys. And I've gone on to do all the different things I do. So I think everybody's happy in the end."

In a December 2011 interview with the San Francisco, California radio station 107.7 The Bone, AVENGED SEVENFOLD guitarist Zacky Vengeance stated about being caught in the middle of the drama between Portnoy and DREAM THEATER: "It was something that we were not used to at all. We had never, ever experienced any kind of in-the-spotlight drama; we just always stay in the shadows and keep any of our personal business private. And [Mike is] a very different character — he always goes straight to fans [on] Twitter or whatever… That's how he dealt with his band, and it was new to us. We like to be in touch with our fans, but we're also very private."

He continued, "[Mike had] been talking about quitting DREAM THEATER, that he wasn't necessarily happy, and he was excited to be playing with us; we were playing huge shows and stuff. I think he got caught up in the moment, got excited. We begged him to consider what he did, because we were in no position to find a permanent replacement, because in all honesty, you can't replace Jimmy, who was our best friend — first and foremost — besides beng an amazing drummer. So it just wasn't the right time and the place. And he told us, 'Hey, I've got good news and bad news. I quit DREAM THEATER.' We were like, 'Oh, no. Well, if you're happy, then that's good.' [And he was like], 'Now I can be with you guys.' And we were like, 'That's not necessarily what we decided upon. And you should take your time and reconsider.' And he was like, 'Well, I put out my press release.' We were like, 'Dude, that's not how we do business. You should have talked to us before.' Then it was back and forth [between Mike and his former DREAM THEATER bandmates]. We were out of it; we had nothing to do with it. We were just trying to get back on our feet. So when all that was going down, it was causing us a lot of heartache, to be honest — to see our name in this drama-filled love triangle. He helped us out at a really vulnerable time, and for that we will always be extremely appreciative. But for us, we were so unstable at that point that any unneeded attention was just very harmful to us. Obviously, it didn't work out [between us and Mike], but I think it's for the best — for him and for us."