MIKE PORTNOY On METALLICA: Never Has Such A Huge Band Also Had So Many 'Incredible Misses'

Former DREAM THEATER and current SONS OF APOLLO drummer Mike Portnoy was recently interviewed on "Speak N' Destroy", a podcast about all things METALLICA, hosted by longtime journalist and METALLICA fan Ryan J. Downey. You can now listen to the chat using the SoundCloud widget below.

Speaking about METALLICA's inconsistent catalogue of music, which has included "Lulu", the critically panned and commercially unsuccessful 2011 collaboration with Lou Reed, Portnoy said: "That's the incredible thing about METALLICA. As much as they are the biggest metal band of all time and they've made some of the… I mean, the 'Black Album' and 'Master Of Puppets' and 'Kill 'Em All', these are the greatest metal albums of all time, but they've also had such incredible misses as well. It's crazy. Never has such a huge, huge band also had so many [critically panned releases]. I mean, 'Lulu' — oh my God! The fact that they made an album like that, or what they did with 'St. Anger', or, in my opinion, with 'Load' and 'Reload' albums. So they're not invincible. They're not like THE BEATLES where everything they touched was perfect and classic and is gold. They've had these missteps as well, but it just never seemed to stop them."

Portnoy also talked about METALLICA's controversial 2003 LP "St. Anger", which was criticized by many fans for its lack of guitar solos, extended riffs, its raw production and the thin drum sound. "There's no question, it's an incredibly weird album," Mike said. "As much as I liked a lot of those elements of what they were going for [on that record], I also remember sitting… DREAM THEATER was making the 'Train Of Thought' album at that time, and we had just [played] the whole 'Master Of Puppets' [LP in concert] and put that out. And I remember while we were making the 'Train Of Thought' album, 'St. Anger' came out, and I remember sitting in my car outside the studio and I called [DREAM THEATER guitarist] John Petrucci into my car to play him some of the songs. And it was… I can't remember… maybe the middle of 'Invisible Kid' or 'Dirty Window', this weird middle section with just screaming and moaning, and James's [Hetfield] vocals are… [I was, like], 'What is going on?' And the sound of the snare drum.

"As much as I appreciated that album and it got me back because of the spirit and the intention and I really got that, there's no question there's some really hard-to-listen-to stuff on that album," Portnoy added. "There were moments where I was, like, 'Oh my God! What are they fucking thinking?' But then there were other moments [where I was], like, 'Oh, man! This is fucking great!' It was a really mixed album for me."

In previous interviews, Portnoy has been vocal in his praise of METALLICA, going so far as to talk up Lars Ulrich's contributions to the band despite the fact that it's become fashionable to dump on the METALLICA drummer's skills. In a 2015 chat with Sticks For Stones, Mike said that Ulrich's "value is not necessarily in drumming, but it has to do with him being a part of a musical revolution that he was a huge, huge part of starting. He's been a tremendous asset to METALLICA, not only as a writer, but as a businessman and his abilities to market things and his ability to arrange music and his performance on stage — he's a very animated player on stage… What Lars brings to the music of METALLICA is absolutely invaluable. So I could care less if his meter might be slightly up and down, or if his fills are slightly sloppy; I don't care about that. To me, there's way more to being a good drummer than precision and technique." 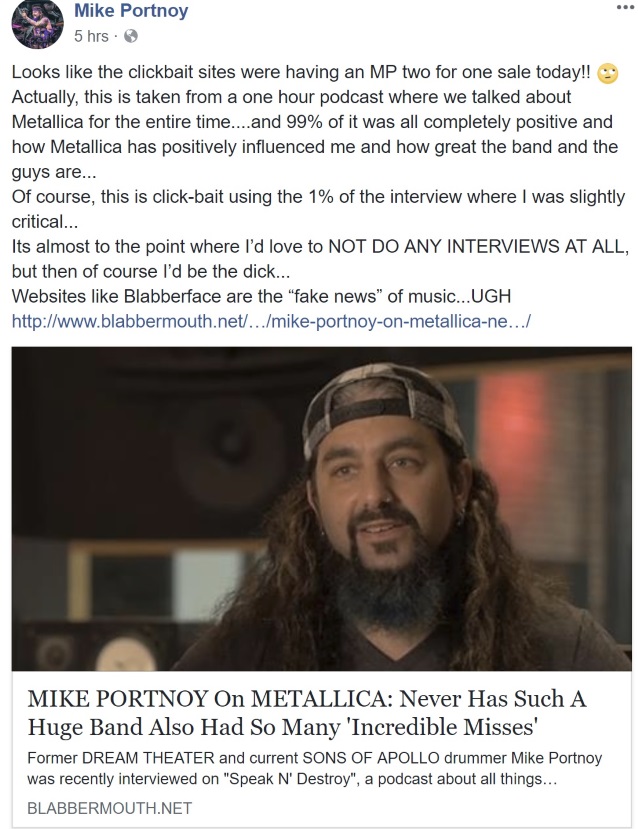 Speak N’ Destroy Ep21: MIKE PORTNOY! 🥁🥁🤘🏻Discovering Kill ‘Em All, seeing @Metallica in ‘85, Cliff, covering all of Master of Puppets in Dream Theater, the gracious spirit of @larsulrich & so much more! MP talks all things METALLICA for over an hour: https://t.co/va5osro7yTpic.twitter.com/GMK3K1IKsl