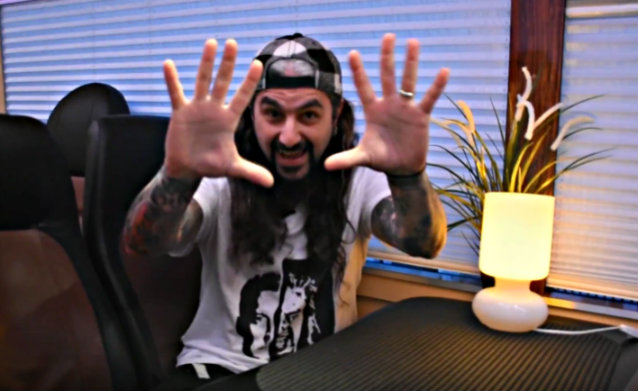 MIKE PORTNOY Says He Is 'Not Too Busy' To Rejoin DREAM THEATER On 'Images, Words & Beyond' Tour

Ex-DREAM THEATER drummer Mike Portnoy says that he is "not too busy" to rejoin his former bandmates on their "Images, Words & Beyond" tour, but notes that he hasn't been invited to take part in any of the shows.

DREAM THEATER is celebrating the 25th anniversary of its milestone RIAA-gold-certified album "Images And Words" with a special tour on which it is performing the LP in its entirety along with fan favorites from the group's renowned catalogue.

During a recent question-and-answer session, DREAM THEATER guitarist John Petrucci and keyboardist Jordan Rudess were asked by a fan if they would be willing to play with Portnoy again, possibly at a show celebrating a band anniversary. The DREAM THEATER guitarist responded: "There's no plans to do anything like that. Mike's great, and he's doing many, many projects right now." Rudess jokingly added: "He's too busy for us." Petrucci continued: "Yeah, he's in twenty bands. I don't think he has time. But, yeah, this tour celebrating 'Images', we won't be having any past-member guests."

Asked by TNT Radio Rock if it's true that he is "too busy" to play with DREAM THEATER on the "Images, Words & Beyond" tour, Portnoy said (see video below): "I think [Petrucci and Rudess] were making a joke, saying I'm too busy for them. That's not true. I always have time for anybody from my history."

Portnoy went on to say that he has "a very good relationship with John Petrucci and Jordan, and we stay in touch and we remain friends. The other two [singer James LaBrie and bassist John Myung] I've barely heard from. I've tried to reach out. But anyway, I have very fond memories of all those years and it's a huge part of my life."

He added: "I'm not too busy for them. I always make time for everybody. I'm in eighty-seven bands, so, obviously, I'm very capable of juggling a lot of things. I just need the invitation. They haven't invited me to any of the shows. So that's up to them."

Portnoy also talked about his decision to perform DREAM THEATER's "Twelve-Step Suite" in its entirety for the first time ever on the Cruise To The Edge, which sailed out of Tampa, Florida on February 7. The music documents the musician's battle with alcoholism, and is an ensemble of five songs recorded by DREAM THEATER from 2002 to 2009, with titles that reflect his struggles: "The Glass Prison", "This Dying Soul", "The Root Of All Evil", "Repentance" and "The Shattered Fortress".

Portnoy said: "Well, the reason the SHATTERED FORTRESS came about — and it's not even a band, it's not even a project; it's just kind of an event, it's not like an ongoing thing that I'm going to do beyond these very special shows. The way it came about was because I was doing a fiftieth-birthday concert on Cruise To The Edge, and at that concert, or actually two concerts, I was basically playing music from my entire career, and, of course, inevitably, a lot of that was gonna be DREAM THEATER music. And I decided it was finally time to play the 'Twelve-Step Suite' that I started fifteen years ago, back in 2002, and never got to play it live in its entirety. So it really all began because it was originally just gonna be part of my fiftieth-birthday celebration, and once we announced that, suddenly I got offers to play these different festivals, and then some select other shows throughout Europe and America. Basically, I figured it's my fiftieth birthday this year, and it's a good time to just do it. And rather than do it only once for my fiftieth-birthday concert, maybe share it with fans around the world that have been wanting to see it. So this is it."

He went on to say: "I never had any intentions of continuing with DREAM THEATER music. Obviously, everything I've done over the past six or seven years is I've done everything butDREAM THEATER music — I've done THE WINERY DOGS and FLYING COLORS and ADRENALINE MOB and TWISTED SISTER and THE NEAL MORSE BAND and METAL ALLEGIANCE. So I've never revisited DREAM THEATER material, but this seems like the right opportunity to finally do it. So it's kind of just a one-off event and a special treat — not only for the fans, but for myself as well."

Asked what it has been like to revisit DREAM THEATER's "Twelve-Step Suite" more than half a decade since his exit from the band, Portnoy said: "Well, it's very therapeutic, I guess, maybe, to say. It was one level of being therapeutic for me to write all of these songs, 'cause it was coming out of my life and about what I was dealing with, with the twelve steps of sobriety. So it was one level of therapy to write all of this and release it, but now to actually put it together and perform it, it's another level of… It's kind of like unfinished business, it's kind of like closure, I'm getting some closure on this, because I never had the opportunity to do it once I completed all of the songs."

He added: "It was always a dream of mine to perform them from start to finish. It would have been nice if it was with DREAM THEATER, but the circumstances are what they are, and I'd rather do this and get it out of my system, not only for myself but also for the fans to enjoy. I'd rather do it this way than not do it at all."

Regarding whether there are plans to film and record any of the SHATTERED FORTRESS shows for possible release, Portnoy said: "Believe me, I would love to release this for the fans, but I can't guarantee that I can release it for the fans, because of legal issues with my other band, with DREAM THEATER. So if I can release it in some form, I would love to, but there's no guarantees. There's a lot of red tape involved."