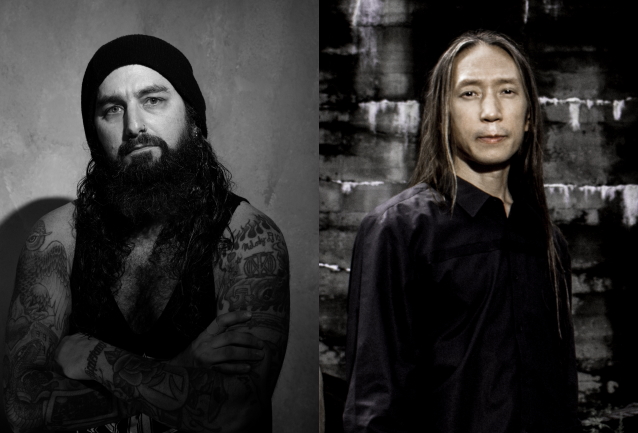 The ex-DREAM THEATER drummer addressed his relationship with Myung while filming a new video message on Cameo, which lets users hire celebrities to record brief, personalized video messages about virtually any topic.

Asked if he still keeps in touch with John, Mike said (see video below): "Well, actually, yeah, I do. And he, actually, he and his family came and spent New Year's Eve with us back a few months ago. We had a really great time together ringing in the New Year together. John is a very quiet guy, so we didn't post any pictures and we didn't put it out there. He's not really into the whole social media thing, so I wanted to respect that, and we kind of just kept it a nice, quiet evening between us, and we had a great time together. So it was great to see him and spend time together."

In the last couple of years, Portnoy has shared several photos of him hanging out with other DREAM THEATER members, including keyboardist Jordan Rudess and guitarist John Petrucci.

More than two years ago, Portnoy posted a photo of him hanging out with Petrucci in a move that clearly represented a thawing of tensions between the two musicians who had been friends for more than three decades.

Although Portnoy and his former bandmates in DREAM THEATER engaged in a public war of words following his exit from the group, Rudess told SiriusXM's "Trunk Nation" that he harbors no resentment toward his longtime friend.

"When Portnoy left the band, there was tension — natural tension — because it was a big deal," he said. "But what's really important to me is finding that… especially somebody who I care about, who I had so much life experience with. And he's a really great guy. There are so many wonderful things about him. So I wanna enjoy that.