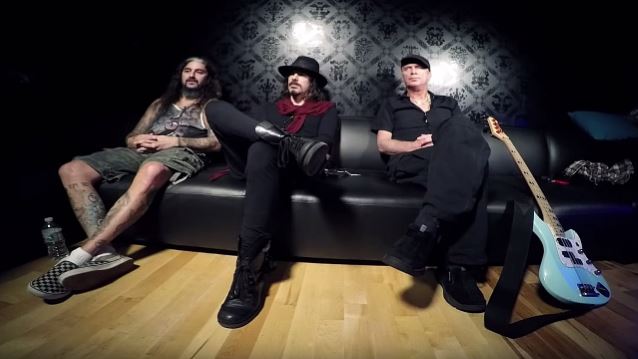 In a brand new interview with Australia's The Rockpit, drummer Mike Portnoy (DREAM THEATER, AVENGED SEVENFOLD) was once again asked about the status of THE WINERY DOGS, his power trio with guitarist/vocalist Richie Kotzen and legendary bassist Billy Sheehan (MR. BIG, TALAS, DAVID LEE ROTH). He said: "[I don't know] if you want to use the word 'hiatus' or if you want to just say we're between albums. We did two back-to-back albums and tours and they were very well-received throughout the whole world, so all three of us really love the band, but I think Richie in particular kind of wanted a breather. He's always been a solo artist for the last twenty years or so, so being in a full-time band is something that's kind of new to him and a bit overwhelming, so I think he wanted a breather to go do his solo thing for a while. And, in the meantime, there's no shortage of things for me and Billy to do, so we're kind of just on break at the moment. And once everybody has caught their breath, we will get back to work on another album at some point."

During a recent appearance on the "Trunk Nation" show on SiriusXM channel Volume (106),Kotzen clarified some of his previous comments which painted an uncertain future for THE WINERY DOGS. He explained: "It's unfortunate, because… It's funny, because I've been doing press and I've said things… I always know what I'm saying. I'm not a politician; I'm a very open, honest guy, and that's the way it is — that's the way I am; take it or leave it. So I said specifically all the great things that the band did, how much fun it is and how much I love it, but I also said that right now, personally, it's the furthest thing from my mind, because, obviously, I just finished a new [solo] record and so I'm getting out, touring and getting behind my new music, which is what people do. And I also pointed out that the other guys [from THE WINERY DOGS] are doing the same thing. I pointed out that MR. BIG has a record coming out, and we know Mike is always busy. So I just pointed out the obvious. And I think I said [I would] keep all doors open, and, of course, in the future, we could see a WINERY DOGS record. I think I said something else that maybe got people in a panic, that it would probably be at least two years [before there is new music from THE WINERY DOGS]. But if you really look at reality, if my [solo] album cycle is going from now into 2018 and there's a MR. BIG thing happening and this and that, it really will be two years until we actually get our hands on new music from THE WINERY DOGS, because let's face it: we have to write it, we have to create it. So my point is the DOGS are sleeping, but they'll be back. So whatever I say should not be creating a panic, it's just talking frankly and honestly and [relaying the] reality of what's going on."

He continued: "The band's great, we all love each other, we all play well together. It's afforded all of us a lot of great opportunities and kind of recharged all of our careers individually, and especially mine, so we all recognize that, we love playing together, and, of course, down the line, we're gonna do something. But, you know, it's unfortunate, because I said some things very casually, like I'm saying now, and there's a web site that seems to only report stuff if they can take a little clip and spin it into something to create a little chaos. And I really think that's what they did. Because they didn't talk about my new record, they didn't talk about anything. The headline had something to do with THE WINERY DOGS and trying to make it sound like I said the band has no future, which I said nothing like that; I said exactly what you're hearing me say now. So if that's a problem for anybody to interpret, I can't help you. See a doctor."

Kotzen appeared to be referencing an interview he gave to Myglobalmind in which he said didn't foresee anything happening [with THE WINERY DOGS] for a couple of years." He explained: "It's an interesting thing, with THE WINERY DOGS I wasn't looking to join a band for the rest of my life. My idea was to take a break from being Richie Kotzen and do something more collaborative. I thought it would be fun to do the first WINERY DOGS CD and tour to some key market shows and that would be the end of it. We ended up getting a great response and toured for over a year. People loved the CD so much that we got back in the studio to do the second one.

"For me, it's time to come home and do what I've always done. I have been making Richie Kotzen records since I was 18; it's a source of survival, sanity, art, and everything you want to call it. I know the other guys have something very exciting in the works which people will love. It may fill a WINERY DOGS void."

Kotzen continued: "I'm not saying it's over; you never know in a couple of years from now we may get back together and do something. What I am saying is THE WINERY DOGS are the furthest thing from my mind right now with a new [solo] CD coming out."

THE WINERY DOGS last year completed a tour in support of its second album, "Hot Streak", which was released in October 2015 in North America via Loud & Proud Records.

THE WINERY DOGS' May 27, 2016 performance at Teatro Cariola in Santiago, Chile was professionally filmed and recorded for an upcoming DVD and Blu-ray, tentatively due in July.