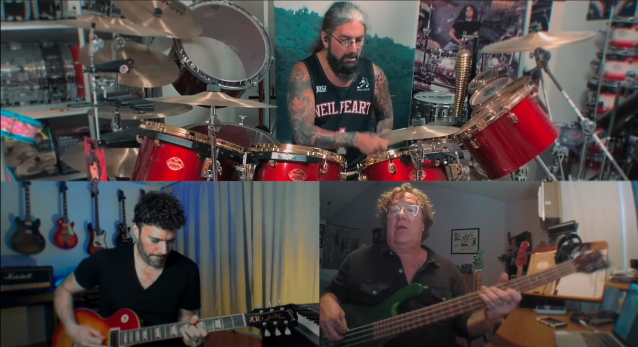 Drummer Mike Portnoy (SONS OF APOLLO, DREAM THEATER) has teamed up with bassist Stu Hamm, guitarist Paulie Z and keyboardist Walter Ino to record a cover version of the RUSH classic "YYZ", filmed while they were in quarantine. The clip was premiered this past Tuesday (July 14) as part of the David Z Foundation's third annual fundraising campaign.

This past January, Mike Portnoy shot down rumors that he will tour with Geddy Lee and Alex Lifeson as the replacement for late RUSH drummer Neil Peart.

Mike previously discussed the possibility of a collaboration with Lee and Lifeson during a January 2019 interview with Eric Blair of "The Blairing Out With Eric Blair Show". At the time, he said: "The reality is, look, those guys are my heroes and Neil as well, obviously. I would do it in a heartbeat if hypothetically it was ever asked. But that being said, in a hypothetical world, if the call ever came, yeah, it would be a dream gig for me. Of course."

When Blair pointed out to Portnoy that a new Lee-Lifeson collaboration would not be called RUSH, making it easier for Mike to just "slip right in there," the drummer said: "Hey, I know the tunes. I've been playing 'em my whole life. In fact, I just did a really cool RUSH tribute. It's a steel drum tribute, with a pan drum orchestra of 50 different steel drummers and myself on drums and guitar and bass, and we recorded a bunch of RUSH songs, but with this 50-piece steel drum orchestra. It was really cool."

In addition to SONS OF APOLLO — whose sophomore album "MMXX" was released in January — Portnoy is currently a member of five other bands — TRANSATLANTIC; THE NEAL MORSE BAND; all-star metal collective METAL ALLEGIANCE; pop/prog supergroup FLYING COLORS; and THE WINERY DOGS.

When Peart's death was first made public on January 10, Lifeson and Lee revealed in a statement that he had been diagnosed with brain cancer three and a half years earlier, just a few months after the band completed its final tour.