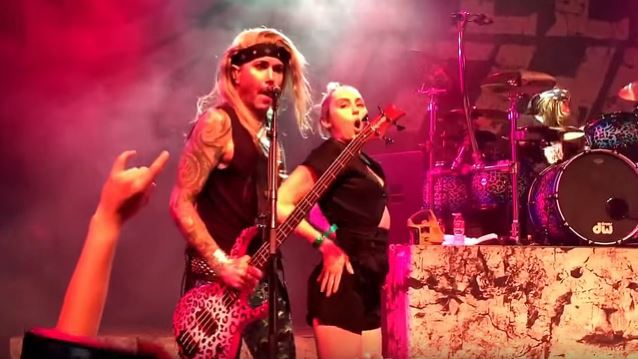 Los Angeles glam-metal jokesters STEEL PANTHER were joined by country singer Billy Ray Cyrus and his pop-superstar daughter Miley Cyrus on stage last night (Monday, August 3) at at the historic House Of Blues in West Hollywood, California to perform a cover version of DEF LEPPARD's "Pour Some Sugar On Me". Check out fan-filmed video footage below.

Miley reportedly didn't plan on performing, but changed her mind when the band prodded her from the stage, encouraging the crowd to chant, "Miley sing!" over and over again.

The House Of Blues on the Sunset Strip will close its doors for good after last night's concert. The venue, which first opened in 1994, will be demolished, and the area will instead house a hotel, condo, rentals and a different entertainment venue.

KNBC spoke to the House of Blues representatives who say they may open another location in Downtown Los Angeles or in Hollywood.

"It's an honor and a privilege to play the final show at a venue with so much rock and roll history!" said STEEL PANTHER lead singer Michael Starr. "When they tear the place down, I hope all our sex toys that have gone missing backstage over the years are found," he added.

House Of Blues has become a musical mainstay in Los Angeles, hosting acts such as Prince, Britney Spears, AEROSMITH and Tony Bennett, among many others.

In their early years, STEEL PANTHER performed regularly on Monday nights at House Of Blues, becoming a hit among Hollywood's elite, including Steven Tyler, Vince Vaughn, Tom Morello, Kelly Clarkson, Avril Lavigne, Jessica Simpson and Jeremy Piven, who would join the band on stage to sing, dance, and rock out.