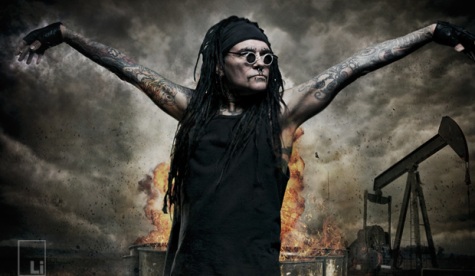 MINISTRY mainman Al Jourgensen — who currently lives and records in El Paso, Texas — was asked in a brand new interview with Loudwire for his thoughts on Texas Governor and former Republican presidential candidate Rick Perry. "I have no thoughts on him," he replied. "You know why? Because he's got no thoughts in his head. Why should I listen to this fucking guy? Him and Bush ruined this state.

"When Ann Richards was governor here, this state was the coolest fucking place to be in the world. Now it's a shithole, but I'm stuck here and I love it. I've got a really nice house and a recording studio and I'm more sequestered from the rest of the world. Not only that — we're in El Paso, which is not really part of Texas. New Mexico is two blocks away from my house and Mexico is eight blocks away from my house, so I'm right on that tip of Texas.

"Texans don't consider El Pasoans as Texans. They always slander us and the state legislature never gives us enough money for our schools or anything like that. I mean, they totally look at us like a red-headed stepchild up in the attic or something, you know?

"After THE CLASH split up, Paul Simonon came down here for four years because we had the world's largest Harley shop and he bought a Harley. He just spent four years driving around the desert on his bike. He loved it here and I love it here, too.

"I like it down here, it's nothing but bikers and outlaws. It's actually really safe here, man because the cartel bring their drugs up though Juarez and they don't want any problems in El Paso, they just want to make it through the border and get their drugs to Phoenix, Atlanta, Chicago, Los Angeles etc. So they cause no fuss here. Eight blocks away in Juarez, they're about five killings a day. It's worse than Baghdad, but it doesn't spill over into here because the cartel wants to make sure they can get their shipments out through the border without any kind of problems. There's a weird dichotomy here, but you get used to it."

Reaching back to his punk rock roots, Jourgensen and his MINISTRY pirates cover S.O.D.'s "United Forces" — a track written 20 years ago still relevant today as a call to arms for the unrighteous and to those who feel disenfranchised by the "system" as it stands today.