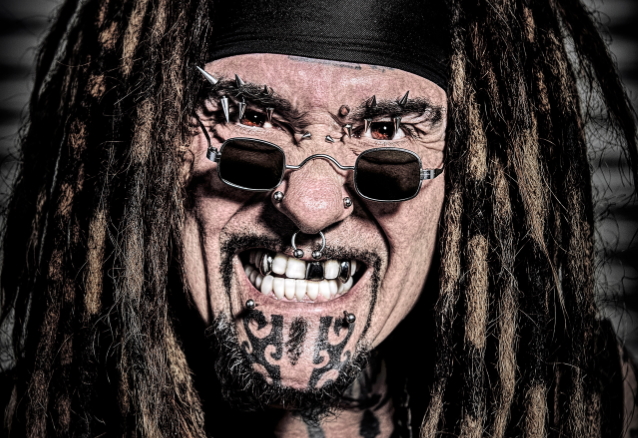 Industrial metal pioneers MINISTRY have released the official music video for their song "Believe Me". The track is taken from the band's 15th studio album, "Moral Hygiene", which was released last October via Nuclear Blast Records.

The "Believe Me" video is a departure from the two previously released professional clip from the album and became a total DIY effort, with each of the bandmembers — drummer Roy Mayorga, guitarists Cesar Soto and Monte Pittman, bassist Paul D'Amour and keyboardist John Bechdel — gearing up for the upcoming tour at home and purchasing an inexpensive green screen to contribute their parts to the performance footage that was then melded together. MINISTRY hopes to encourage other artists to do the same during these difficult times when budgets are tight and still have fun with the creative process.

"Moral Hygiene" was recorded with engineer Michael Rozon (also behind the boards on "AmeriKKKant") at Scheisse Dog Studio, Jourgensen's self-built home studio and creative lab. As with all MINISTRY albums, all songs are written and performed by Jourgensen.

MINISTRY will debut new songs from "Moral Hygiene" on the upcoming "Industrial Strength Tour", kicking off March 2, alongside celebrating the 30th anniversary of seminal album "The Mind Is A Terrible Thing To Taste". Special guests THE MELVINS and CORROSION OF CONFORMITY will share the stage nightly as the tour's special guests. Due to overwhelming demand, MINISTRY added 13 new dates with the tour now running through April 18.