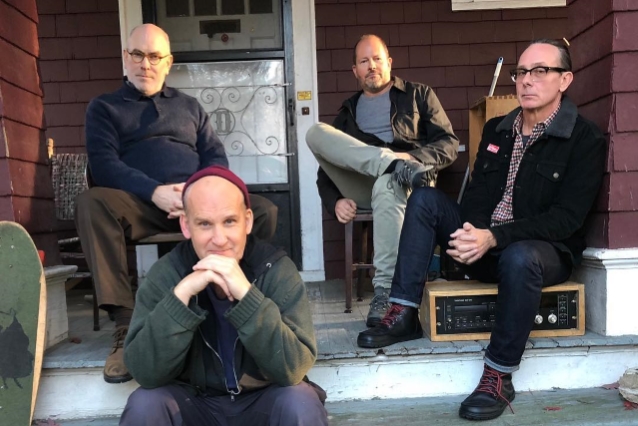 A new picture of the quartet — drummer Jeff Nelson, singer Ian MacKaye, guitarist Lyle Preslar and bassist Brian Baker — sitting on the front porch of Dischord house in south Arlington, Virginia was posted on Baker's Instagram page and was shared by Dischord on Facebook.

Naturally, fans on Facebook have been buzzing about what the photo could mean, with many hoping the band will perform again. But Baker put an end to the speculation, telling WTOP in an e-mail: "This is a non-story. Jeff insists that we always take a porch shot for posterity when the four of us are at Dischord. This is just the first one we've had taken since I've had an Instagram account."

Baker's explanation was corroborated by a caption that accompanied the picture on the Dischord Facebook page. "MINOR THREAT tries to get together every few years to catch up with each other," the caption read. "This photo was taken yesterday at the Dischord house."

MINOR THREAT released two EPs and the studio album "Out Of Step" before breaking up in the mid-'80s. MacKaye formed FUGAZI in 1987 and recently started a new band with his wife and bandmate in THE EVENS, Amy Farina, and FUGAZI bassist Joe Lally. Baker joined fellow punk legends BAD RELIGION in 1994. Preslar was a member of THE MEATMEN in the 1980s and played briefly with SAMHAIN before eventually becoming a lawyer.

Minor Threat tries to get together every few years to catch up with each other . This photo was taken yesterday at the Dischord house.