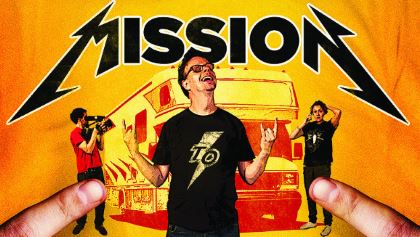 'Mission To Lars' Documentary Feat. METALLICA's LARS ULRICH To Be Made Available In North America

"Mission To Lars", an uplifting documentary feature film about Tom Spicer, a learning-disabled man who, with his siblings help, goes on a transatlantic quest to find his much-obsessed-over hero, METALLICA drummer Lars Ulrich, will be released released to select theaters in North America and on VOD on September 25.

Tom has Fragile X Syndrome, a sort of autism. All he's ever wanted is to meet Lars. After 20 years and 10,000 times of asking his journalist sister, Kate, when he was going to meet Lars, she finally cracked. This is a film that looks beyond disability, and uncovers the soul of a very cool guy.

Kate and filmmaker brother, William, break Tom out of his care home in Exmouth, and hit the road, from Bristol, to Heathrow, to Los Angeles, to Las Vegas and beyond.

"Mission To Lars" was made by William Spicer and James Moore. Both were veterans of music and brand promos, but complete movie novices.

"We had this fantasy of hitting the road with Tom and recreating some of the magic of our teenage years cruising around in £100 cars, eating Burger King and listening to heavy metal on the tape deck," said Kate. "We thought it would be fun, bonding. We wanted to do something good for our brother. We were also sick of him endlessly asking."

It doesn't take long before the hoped for dream becomes a nightmare as Tom's disabilities, the dysfunctional family, and METALLICA's labyrinthine backstage world thwart the Mission at every turn.

At a fingernail destroying screening in 2011 (the night before METALLICA headlined Sonisphere festival),the Spicer family showed their film to Ulrich. The "Mission To Lars" production team squirmed with anticipation: would he like it?

Speaking about the film, Ulrich told NME.com, "I thought it was deeply moving. I haven't seen the whole thing, but I saw a rough cut last summer. Meeting Tom, meeting Kate, when they came out to film it was an experience in itself. But seeing the film [in 2011] and reconnecting with the whole team was another experience."

He continued: "It's not something we're directly involved in, it's their film, their journey, but we're supportive of their endeavour. We don't want to take it over and have it turn into some kind of vanity project. It's a great testament into a world I didn't know much about, and a great testament to the importance of music and what it means to different people."

"Mission To Lars" garnered admiration, The Financial Times' Antonia Quirke had this to say: "I loved this film. More of a classic quest film than a documentary. It's so touching and open-hearted, and has so many magical moments. It feels really epic."

The film has three goals: entertainment, awareness raising and fund raising. All profits go to Mencap, and the film has charity status. In raising money for the film, the producers also raised over £25,000 for Mencap. The film's cinema release was used as an outreach opportunity with talks and events following every screening. Many people, from color graders, sound mixers, Bob Dylan, screening rooms and the production assistant have given their talent and/or time for free. Kasabian donated stuff for them to sell to raise money, Huey from FUN LOVING CRIMINALS put them in touch with some text book tour managers to try out their blagging skills on, although the scary looking dudes backstage at METALLICA's show turn out to be loving pussy cats.

"Mission To Lars"'s profits will continue to be paid to Mencap for as long as the film has a life, DVD, international sales, etc. Mencap have been closely involved in the making of the film. Their belief is that the film, in an entertaining and universally understood way, tells the story of the confusing family dynamics around learning disability, and portrays Tom as a complex and likeable character, and not as someone one sees first as learning disabled and everything else second.

The film is giving all profits to charity and everyone has donated time and music for free.

For more information, go to www.missiontolars.com. 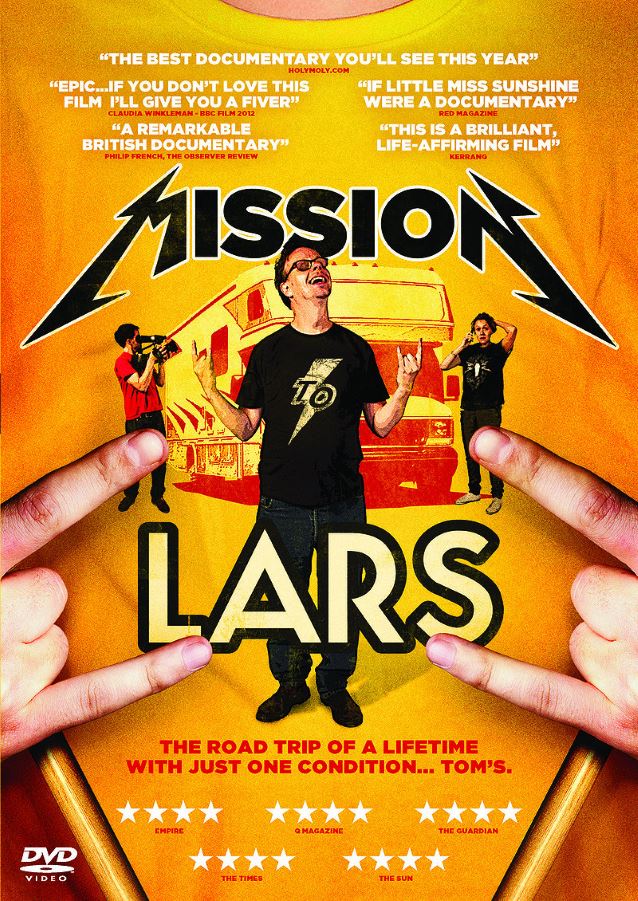